Announcement of Peace and Sport’s Image of the Year 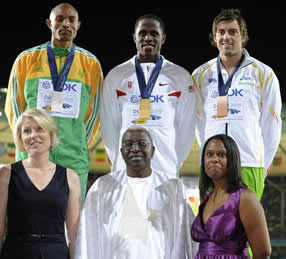 Monaco, 13 October 2009 – On the occasion of the 19th Georges Bertellotti Golden Podium Awards in Monaco, “Peace and Sport L’Organisation pour la Paix par le Sport” unveiled the 2009 winner of the Peace and Sport Image of the Year Award in an ‘avant-première’ announcement.

This prize rewards the best image of fraternity through sport. It is awarded in partnership with SPORTEL Monaco and the news agency, Agence France-Presse.

The presence of the two young women in Berlin for this major sporting event carries on the courageous and unforgettable friendship that their grandfathers began during the 1936 Olympics.

This image bears testimony to the immense power of sport to unite people over and above their differences and to be stronger than hatred, racism and extremism. It embodies the humanist and peaceful ideals of sport.

Joel Bouzou, President and Founder of Peace and Sport, declared: “Sport will never be a vehicle for the discrimination and intolerance that surrounded the 1936 Olympics. On the contrary, it upholds the values of peace, brotherhood and friendship among nations; values that inspire Peace and Sport and all of us. The Peace and Sport Award for the Image of the Year 2009 is proof that the sporting mentality transcends time”.

David Tomatis, Chief Executive Officer of Sportel, said: “SPORTELMonaco is proud to welcome Peace and Sport for the second consecutive year to announce this prestigious award. The Georges Bertellotti Golden Podium Awards recompense the best sports photos of the year. And what can be more beautiful than these gestures of brotherhood born around sport?“

Eric Axelson, Head of the AFP Marketing Group for Sport added: “Through the unforgettable stories of photographers and their ability to capture emotions and convey the most beautiful values of sport, Agence France-Presse expresses its support for any initiative that carries a message of peace and reconciliation among populations. With the Winter Olympics in Vancouver and the Football World Cup in South Africa on the horizon  and after the announcement of the choice of Rio as host city for the Olympic Games in 2016, we can only hope that there will be plenty more symbolic moments like this. But we should for further than symbolic gestures, and, as Peace and Sport suggests, initiate actions to aid the less fortunate. “