Slumdog? Yep. This time on the soccer field.

While no player has risen to land a huge European contract, that’s okay, because that’s not the purpose behind Oscar. Rather, it is to give young children incentive to go to school and try hard. The lure? Why, the beautiful game, of course.

The article from Outlook Business can be found at http://business.outlookindia.com/article.aspx?261422 and is copied below. You can find an interview with Oscar’s founder, Ashok Rathod, at Change.org, http://socialentrepreneurship.change.org/blog/view/youth_taking_action_empowering_at-risk_youth_through_sport.

It’s eight thirty on a Saturday morning. Ashok Rathod is pacing outside the Bombay Port Trust football ground, speed-dialling. Half his football team is missing. The opponents are already there. Mentorto his team, 21-year-old Rathod knows not only each of his players by their first names, but also their parents and what they do for a living. Rathod is calling them.A few kilometers away, the sources of Rathod’s edginess have just gotten off a local train. Transport problems from Reay Road station in Mumbai to the football field have delayed them. But, they make it, just in time. 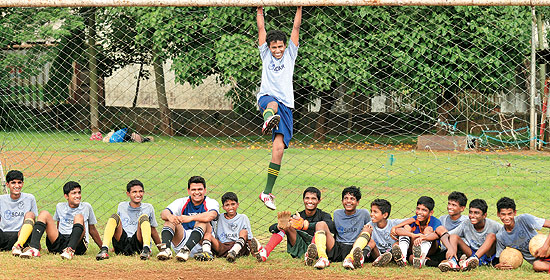 Battle on. The Oscar team might lack punctuality but not athletic ability. The first goal is scored in the eighth minute. By half time, Oscar leads 2-0. In fifty minutes, Oscar wins, 4-0.

After the match, the players begin their journey back home. All of them stay in Cuffe Parade—among the most affluent localities in the world. The Ambanis live there. However, the football players live in the Ambedkar Nagar slums. For them, the game makes things better.

How? The answer lies in the life of Ashok Rathod. He studied till Class 12 before financial needs forced him to find a job. It’s common in the slums, says Rathod. Several of his friends too dropped out, and took up odd jobs. “As they started making money, they picked up bad habits like drinking, gambling and smoking,” says Rathod.

He was lucky. Rathod started working for an NGO called Magic Bus which uses sports as a medium to make children realise their own potential and drive change. “It was then that I realised how much sport can change your life,” he says.

When Rathod saw younger kids in his slum drop out of school and take the same route, he founded Oscar, in October 2006. Football was chosen because Rathod could play it. The only condition was that kids in schools had to pass all exams to be eligible to play. Dropouts, on the other hand, have to take compulsory study classes thrice a week. Ashok’s friends Ganpat and Suraj teach the kids.

But it has not been an easy ride for Rathod. His folks disapproved. The children’s parents were not thrilled. Rathod convinced the parents. Personally. “It wasn’t easy,” he says wryly.

Football, though, worked miracles. A team member, Deepak (12), skipped snacks and saved his meagre pocket money of Rs 3 a day for months to buy himself football boots. The kids began to perform better. And the project itself has grown. Today, there are over 40 kids at Oscar, aged from 7 to 17.

It is also attracting volunteers like Nachiket Singhania from Mumbai’s prestigious Sydenham College, who coaches the team on weekends.

What’s Rathod’s next goal? “I wish I could do something for the girls in the slum. They are in worse shape,” Rathod says.