This is a piece done by Wright Thompson (he also wrote the great “Hungry for a Better Life,” also featured at this blog) for ESPN’s Outside the Lines. As we kick-off the first full-weekend of the new NFL season – which inevitably will end WITHOUT a Jets Super Bowl – we wanted to highlight how great it is for us to sit safely at home with access to pretty much everything while others are not so lucky. The common bond? Football.

The full story can be found at http://sports.espn.go.com/espn/eticket/story?page=iraq/thompson, with an excerpt provide below.

Two Beers in the Desert

It looks almost like a college dorm room, decorated in the classic early frat guy motif, with two messy beds, Red Man and Copenhagen on the table, tubs of weightlifting supplements, and the Sistine Chapel of testosterone — a collage of almost-naked women covering most of a wall. There’s a fridge, an Xbox and three dudes watching MTV. Yeah, a normal college dorm.

Only, it’s Iraqi MTV, and there’s body armor under the entertainment center, weapon clips on the floor, an M-4 rifle on one of the beds, another leaning up against the wall. The three guys are part of a colonel’s security detail, and they spend most days outside the wire of Camp Falcon. Any of them probably could kill you with one of the girlie magazines lying around. In between critiquing the videos, they’re talking about the hottest topic on this forward operating base in south Baghdad: the Super Bowl and the two beers. 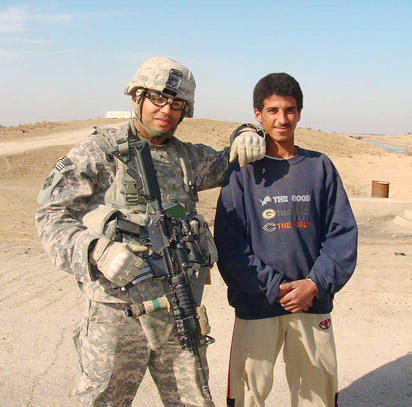 All sorts of rumors have sprung up here since the Army announced that each soldier in Iraq would get two beers — and two beers only — during Super Bowl XLIII, a rare break from the no-alcohol-in-a-war-zone policy. While people at home fixate about the game, troops in Iraq talk about the beer. Is it good? Will they actually get it? Where is this beer hidden? One whisper has it with the ammo. These guys, who are members of the hard-charging 7th Squadron, 10th Cavalry Regiment, joke about staging a midnight commando raid. Covert ops, baby. One says he’s going to mix the beer with an energy drink, a Baghdad Jagerbomb. The anticipation is palpable.

The other guys laugh.

“If you drink ’em too slow, they’re gonna go to waste,” Valencia says. “You gotta take ’em straight to the head.” When he’s not chillaxing, Valencia is an experienced, respected noncommissioned officer, a member of the exclusive Audie Murphy Club, named after the Medal of Honor winner.

From his bed, Sgt. Kyle Slucter asks what kind of beer they’ll be getting.

“When we were out on a mission, the general was in town, and I asked his aide,” Valencia explains.

“I don’t care if it was Milwaukee’s Best,” Slucter says.

Then the Pussycat Dolls come on the television, and everyone gets quiet.

A history of war, told through the eyes of its beverages

This has been a war of uppers. A coffee drink sold on all the bases in Iraq is called MOAC: Mother of All Coffees. It has enough caffeine in each cup to power the crew of a battleship. There’s no decaf in plain sight in the chow hall, just two pots marked “Strong” and “Light.” Energy drinks are a way of life. The Humvees and armored trucks rolling through the dusty Forward Operating Base Falcon early this Sunday morning, passing concrete blast walls and two stray dogs, are packed with troopers whose opinion of an impending mission, so the chatter goes, can be measured with astonishing accuracy by seeing what they drink before leaving. Coffee means a walk in the park. Rip It means a little more serious. If they’re pounding Monster, they’re expecting a Hollywood action movie. “The Vietnam era guys had hookers, booze and drugs,” one Falcon resident says. “We have coffee.” 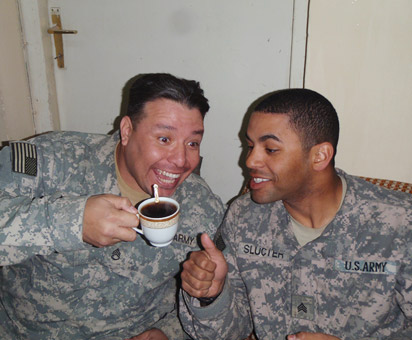 For most of the war, Camp Falcon needed to be hyper-alert. The place has been a magnet for mortar and rocket attacks, the neighborhoods outside the walls a swamp of sectarian violence. But in the past months, thanks to an agreement to hand over many operations to the Iraqis, and the costly but effective surge, the days and nights have been as calm as they’ve been in years. Life inside gets more garrisonized every day. Mealtimes feel like the ones back home, with omelet chefs, a carving station and, naturally, big televisions showing cable news and sporting events. The gym has packed treadmills, and the dusty sports field has flag football. Karaoke nights are a regular feature of the base’s social scene. There is no tension in the air, and that means one thing:

For the first time here, a beverage will help them unwind rather than jack them up. This small break from the normal routine has been received by the soldiers, as you might imagine, as if they’d been told the newest front of the war on terror was South Padre Island. For a change, the entire camp is anticipating something other than combat, or going home, or shipping out to Afghanistan.

(The piece continues at http://sports.espn.go.com/espn/eticket/story?page=iraq/thompson).