(You can sing that blog title to the tune of the Subway $5 footlong jingle).

This falls under the “where-are-they-now” category and is a good one. I remember watching Eric Heiden as a kid. Being an athlete and sports fan and coming from a medical family, I view Heiden with amazement, which probably would make him uncomfortable.

The full story by Jere Longman of the New York Times can be found at http://www.nytimes.com/2009/10/01/sports/01heiden.html?_r=1&ref=sports, with an excerpt below.

Former Speedskating Champion Heiden Is Staying Close to the Ice

MURRAY, Utah — The surgeon rubbed his thumb over the speedskater’s thigh, just above the knee and below a seven-inch wound sutured into an angry smile.

“As we expected with the blood loss,” the surgeon said.

On Sept. 12, J.R. Celski crashed in a 500-meter race at the national short-track championships in Marquette, Mich., his right skate slicing open his left thigh to the femur, blood pooling on the ice.

On Monday morning, Celski, 19, went through two hours of range-of-motion exercises at a clinic here south of Salt Lake City, continuing his recovery toward possibly competing at the Winter Olympics in Vancouver in February.

The orthopedic surgeon monitoring his rehabilitation is Eric Heiden.

“He’s a five-time gold medalist in the Olympics,” Celski said. “Who would you want taking care of you more than a former speedskater? He knows what he’s doing. He’s making sure I stay positive. Just the idea that he’s my doctor — his opinion matters more than an ordinary doctor.” 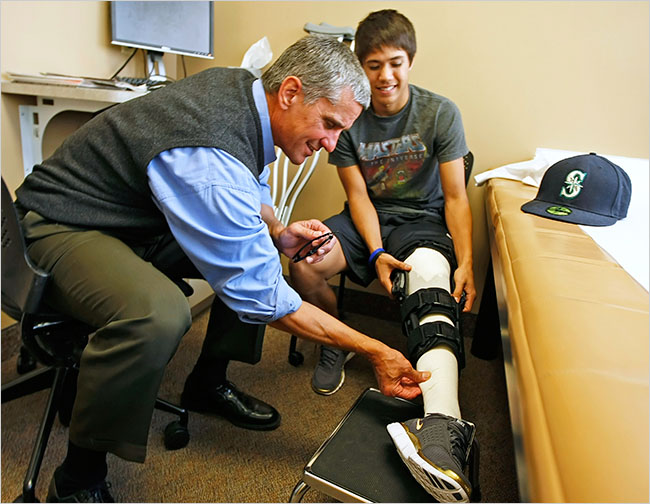 In February, 30 years will have passed since Heiden won gold medals in all five speedskating events at the 1980 Winter Games in Lake Placid, N.Y. He whirred around an outdoor track at the high school along Main Street there, wearing skates two sizes too small, hoping the lighter weight would increase his speed, powering himself with thighs so massive he needed size 38 pants even though his waist measured only 32 inches.

“Now I can buy regular pants,” he said with a laugh.

Has it already been 30 years?