Fast is as fast does

As part of an effort to help protect Kenya‘s endangered species, Usain Bolt formally adopted a three-month old cheetah cub today in Nairobi. (What? You thought the world record holder in both the 100 and 200 meters would own a tortoise?)

Bolt bestowed one of his own nicknames upon the cub, naming him “Lightning Bolt”. The three-time Olympic gold medalist paid $13,700 to adopt Lightning Bolt and will contribute $3,000 per year so it can live at an animal orphanage in the Kenyan capital.

Initially (and understandably), Bolt was reluctant to meet a fully grown cheetah, but he seemed comfortable holding his new cub. At one point he even fed Lightning Bolt milk from a bottle.

Fully grown, Lightning Bolt will likely be able to run 65 mph at top speed, about 40 mph faster than his adopted father Usain. One cheetah at a Cincinnati zoo ran the 100 meters in just over six seconds, about 3.5 seconds faster than Bolt’s human world record of 9.58. Some scientists with way too much time on their hands have also tried to apply the physics of a cheetah’s running style in order to maximize the ability of human runners. 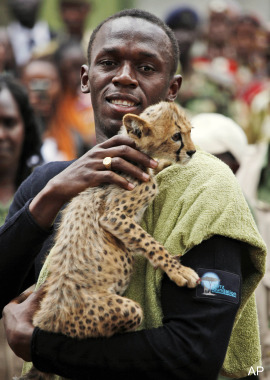