The Office of the United Nations High Commissioner for Refugees (UNHCR) recently published an interview with Bjorn Heidenstrom, a former professional football/soccer player from Norway who is currently biking throughout Europe and next year will make his way through Africa towards South Africa and the 2010 World Cup. Bjorn’s mission is to raise awareness about the plight of refugees across the world.  That awareness will be driven by his ride and at the end, by the giant football jersey that will be created from the ones he has collected throughout his travels, from the famous and non-famous, the professional and the amateur players alike.

I think this is a wonderful effort, especially in light of what I have learned about my family’s history just in the past couple of years. I never really understood the personal connection I had to those who have been refugees until recently. I admittedly had not delved into even my parents’ full history until my nieces were born and we began thinking about ways to build a record of our family, especially their coming from India to the U.S.  It has been during this process that I learned about my parents’, grandparents’ and the host of other relatives’ own refugee status when India was partitioned in 1947. They were forced to leave their homes in Lahore, now part of Pakistan, and had to start over in India. It has been an unbelievable experience already to learn about the challenges they had in making the trip – much of it on foot – and how they built a new life once they got to New Delhi.  It was that reality and the circumstances borne from it that led me to being born in the U.S.

What Bjorn is doing will hopefully help bring awareness to the larger issue of refugees and IDPs and maybe even give us a chance to learn about some specific individuals and families.  We wish him the best of luck.

You can read the full interview at the UNHCR site at http://www.unhcr.org/4ae87a5c6.html, with an excerpt provided below. 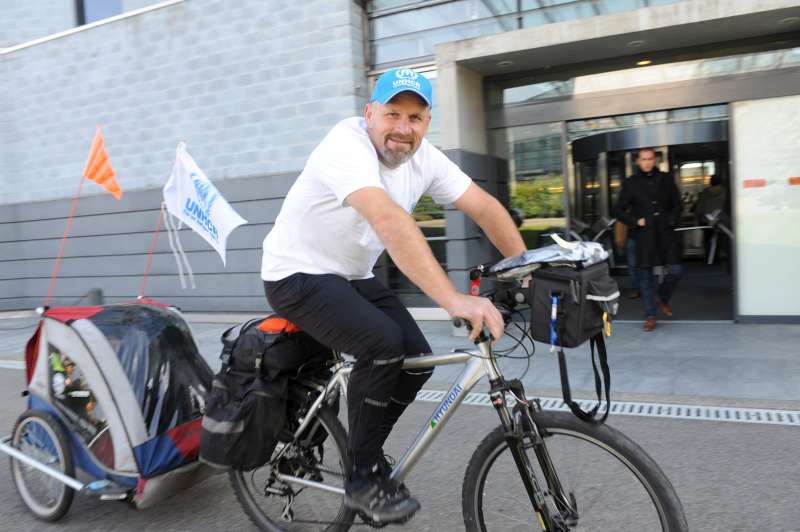 GENEVA, October 28 (UNHCR) – Football is in Bjorn Heidenstrom’s blood. He used to play professionally in his native Norway and in the United Kingdom. The 41-year-old marketing and media manager for Norwegian Premier League team Valerenga is also a humanitarian. Earlier this year, he set out by bicycle from Norway en route for South Africa, which he plans to reach in time for next June’s 2010 World Cup. Heidenstrom will be raising awareness about refugees as well as collecting signed football shirts from professional and amateur clubs in the countries along his route. These will be used to make the world’s largest football shirt, which will be displayed in South Africa. Earlier this week, he paid an impromptu visit to the Geneva headquarters of the UN refugee agency. Before heading off to his next stop, Lyon in France, Heidenstrom talked about his grand bike tour to UNHCR’s Haude Morel, Jeremy Bogen and Leo Dobbs: Excerpts from the interview:

The most focused thing in my brain was refugees, it’s very easy to absorb. Many of them lost kids, I have kids; many of them lost their parents, I’m a parent. Photographs I see make it so easy for me to take it in and say, “Hey, that’s the most important thing in the world where I can help bring some change and spread some awareness.” Also, my kids are in school and they come to me and say, “Hey, refugees, Daddy.”

How did you come up with the ideas for a bike ride and football shirts?

In my first job as marketing manager at a premier league club, we got a lot of sponsors’ money, bought four players and then the money was gone. That was fun. But then a very good friend told me how I could use the football arena, the football family, to spread values or to change mindsets about values.

Then I started thinking of some cause to promote. In Norway, we have a big tradition of exploration and the best known adventurer of all is Fridtjof Nansen [the late polar explorer and first High Commissioner for Refugees].

One evening, I mused that the only place you could find grown-up lads, tattooed, crying together, singing together and hugging each other, was in a football stadium. They do it because they are tribe members and they follow a shirt with a logo on it, such as a red one for Liverpool, or a black-and-white one for Newcastle and so on. I thought, what if I take that symbol, those colours, that shirt and I sew it together with another shirt and another shirt and make the world’s biggest football shirt? Then, what if I expose that shirt during the World Cup football tournament with 900 million people watching? That would be good exposure, bring a lot of attention to the symbol or cause. I thought of the football family standing together and thinking about refugees, caring about refugees, spreading awareness about refugees.

(The article continues at http://www.unhcr.org/4ae87a5c6.html)