Just joking. I hope they never go in that direction and change their name.

Nice story from the LA Times about the NHL’s Anaheim Ducks fundraising effort to benefit troops returning home from service.

The full story can be found at http://latimesblogs.latimes.com/sports_blog/2009/11/ducks-operation-homefront-us-veterans.html, with an excerpt below. To learn more about the Ducks in the community, please visit http://ducks.nhl.com/club/page.htm?id=44877.

Ducks to auction camouflage jerseys for a good cause

The camouflage jerseys the Ducks wore Tuesday during the warmups before their game against the Pittsburgh Penguins weren’t part of an attempt at disguising themselves during a difficult season.

The jerseys were worn for a good cause. The Anaheim Ducks Foundation will  auction them on Saturday for the benefit of Operation Homefront, an organization that provides emergency and morale assistance for troops returning home from service. The jerseys worn by Jonas Hiller, Joffrey Lupul, George Parros and Corey Perry will be auctioned during the Ducks’ game against the Phoenix Coyotes at the Honda Center, with the other jerseys to be auctioned later through www.anaheimducks.com. 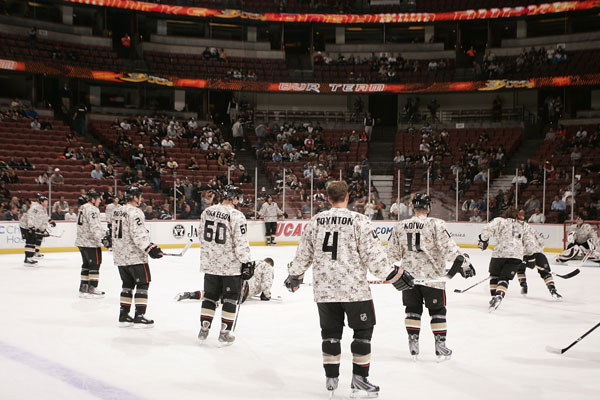 (The article continues at http://latimesblogs.latimes.com/sports_blog/2009/11/ducks-operation-homefront-us-veterans.html)