You don’t have to be a huge hockey fan to appreciate the accomplishments of the players, executives, writers and staff who have given so much to the game over the years.

The following article from the New York Times highlights last night’s induction ceremony. What was especially nice to read were the thanks the inductees showered on those who helped them achieve what they did. The full article can be seen at http://www.nytimes.com/2009/11/10/sports/hockey/10nhl.html, with an excerpt below.

Leetch and Lamoriello Take Place in Hall of Fame

The longtime Rangers defenseman Brian Leetch; the Devils’ president and general manager, Lou Lamoriello; and the former Rangers broadcaster John Davidson were among the inductees into the Hockey Hall of Fame in Toronto on Monday night.

“It’s very humbling to think of being included with all this history and these great players,” said Leetch, who entered the Hall in the players category with Brett Hull, Luc Robitaille and Steve Yzerman. “You look at the Hockey Hall of Fame as one big team in one big locker room. Even if I never get on the ice for one shift, it’s the best team to be on, and I’m truly honored.”

Leetch, the seventh-highest-scoring defenseman in league history, spoke of growing up in Cheshire, Conn., where “the dream of being an N.H.L. player wasn’t there — it was too far-fetched to be imagined,” and thanked his coaches at Avon Old Farms prep school and Boston College.

He also saluted his longtime teammates with the Rangers, Mark Messier, Mike Richter, Adam Graves and his partner on defense, Jeff Beukeboom: “My partner and bodyguard for a lot of those years,” he said. Messier, he added, was “our leader and probably had the most influence on my career outside of my parents.”

Lamoriello, who has run the Devils since 1987, was inducted in the builders category. He began his speech by jokingly telling the four honored players, “You guys took away a lot of my hair over the years.”

He thanked the coaches from his days as a student and later as the athletic director at Providence, including the basketball coach Rick Pitino, whom he hired and who was in the audience. 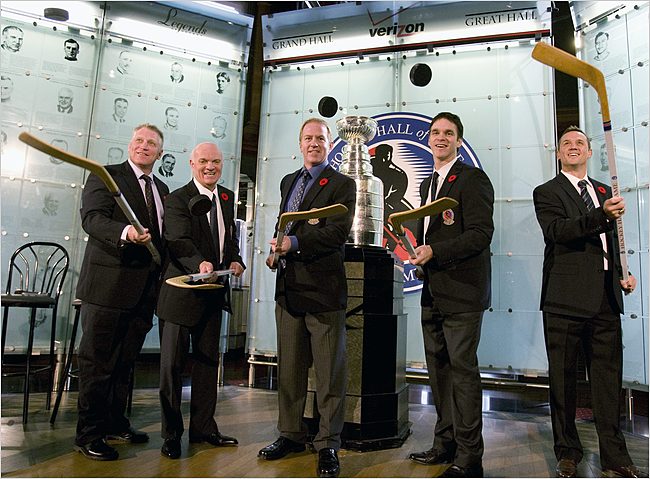