No, we are not talking about “hittin’ the club” but rather “What are we going to do with the rest of lives now that ballin’ is over.”

The various player associations, whether for current or retired players, have begun to spend some more time on issues bigger than Twitter. The new head of the National Basketball Retired Players Association (NBRPA) is Charles Smith, a very successful college and pro player who has done equally well in post-basketball playing endeavors. His perspective on the opportunities and challenges out there for players should prove incredibly valuable in his role.

When we non-pro athletes get our first jobs, retirement is far off in the future. For most pro athletes, retirement should be on one’s mind the first day of the pro career, if not before. Many D-1 colleges are obviously doing very little to prepare these guys for anything other than a short-lived pro career – if the player is lucky enough to even have that – so other groups, such as player unions and retired player associations need to be there with formal programs such as the one being implemented by the NBRPA and even informal mentor/mentee relationships to help their peers with a period of their lives that will dwarf the length of their playing careers.

The full article by Howard Beck at the New York Times about Charles and the NBRPA’s new program can be found at http://www.nytimes.com/2009/11/11/sports/basketball/11smith.html?_r=1, with an excerpt below.

Leading the Way in a Different Kind of Transition

It is an unfortunate quirk of the media age that a career can be reduced to one play, one possession, one 10-second clip played on a maddening loop.

Charles Smith played nine N.B.A. seasons, but for Knicks fans his name often conjures a single portrait of heartache: Four attempts near the basket, four rejections, a blur of red Chicago Bulls jerseys and, finally, a Knicks defeat in Game 5 of the 1993 Eastern Conference finals.

It was the defining moment of the series, won by the Bulls in six games. But its meaning is in the eye of the beholder. The fan sees failure. The player sees determination, a refusal to give up.

“You’re always driven,” Smith said, “to get that next shot.”

Smith retired 12 years ago, but he has never shied from discussing the play, nor ceased pursuing the next shot, the next opportunity, the next chance to reshape his surroundings. 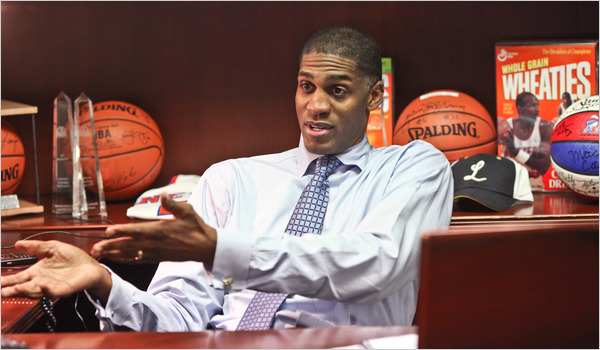 Last December, after more than a decade as an entrepreneur, philanthropist and motivational speaker, Smith became executive director of the National Basketball Retired Players Association, where he is taking on perhaps his greatest challenge to date: the welfare of former players.

This week Smith started a broad initiative — dubbed TAP, or transition assistance program — to offer personal and financial counseling to former players, along with a network of professionals to help them define a second career. The program is the first of its kind for the N.B.A.

Players are lectured on these topics every season by players union representatives — a role that Smith held for several years. But the lessons do not always stick or are forgotten by the time a player retires. Once a player is out of the league, no one is looking out for his welfare.