Howard Bryant from ESPN.com offers great commentary on the subject of Mark McGwire’s hiring as hitting coach for the St. Louis Cardinals at http://sports.espn.go.com/mlb/columns/story?columnist=bryant_howard&id=4602077.  My thoughts are below.

In terms of how this impacts the standings in the National League, I couldn’t care less. Mark McGwire is not going to have any impact on how the Mets are doing.However, for the sake of the game and its claim as America’s Pasttime, a game in which families can come together, fans can appreciate the achievements of its participants, etc., this is a bad move. And it is disappointing to hear the Commissioner of the league say that he is pleased with the move. What would the reaction be if Barry Bonds got hired by the SF Giants? Granted, there is a lot more evidence against Bonds than McGwire when it comes to PEDs, but the fact that one guy is considered by man to be a jerk while the other is a jolly lumberjack-type, doesn’t negate that both hurt the game by disrespecting it. Cheating is just that. By skirting the rules, these and other players took shots at the integrity of the game. And none of them, no matter the season and career home run records and amazing statistics, are bigger than the game.

I’d like to see if this hiring holds up through pre-season next year. The confines of friendly of St. Louis is one thing (Bonds had pretty good in SF) but every fan and observer of the game in every city will have the right to question McGwire and the St. Louis franchise about his past. And ducking press conferences, like he did for his hiring, won’t cut it. 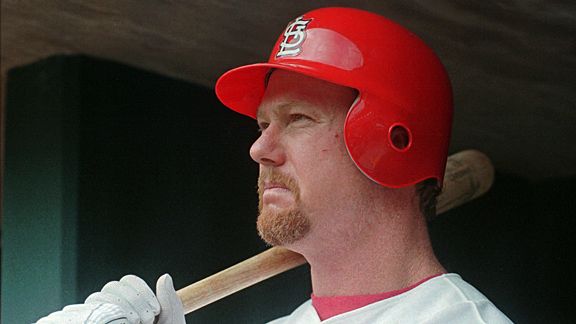