Forget about placing an NFL or NBA team in Europe. Along with Mexico, Cuba is a better long-term bet.

Much has been written about Fidel Castro’s and Cuba’s love of baseball and how the sport may be a foundation from which future relations can be built. But it is not just  baseball. There is also boxing, track & field, and basketball. We are both proud sports-crazed countries. Our geographic proximity has contributed to a shared history, some of it quite positive. Increased cultural exchanges, and that includes sports, will allow us to build an even more positive legacy.

An article about U.S.-Cuba baseball diplomacy by Frederic Frommer from AP can be found at http://news.yahoo.com/s/ap/20091113/ap_on_sp_ot/us_cuba_baseball_diplomacy, with an excerpt below.

Can baseball help bring US and Cuba together?

WASHINGTON – “Pingpong diplomacy” thawed relations between the United States and China in 1971. Can “baseball diplomacy” help do the same for the U.S. and Cuba?

Americans ranging from 12-year-old ballplayers to softballing senior citizens are visiting the communist island to engage in their own kind of field work, and there’s talk of another trip by a major league team.

These bat-and-ball initiatives come as the Obama administration takes steps toward improving relations with the Cold War rival, such as loosening financial and travel restrictions on Americans with relatives on the island.

“I think it would be good,” said former World Series MVP Livan Hernandez, who defected from Cuba in the 1990s. “I want to come back to my own country. I miss my family, I miss my friends. I think it’s time to do something like that.”

Baltimore Orioles owner Peter Angelos, who staged exhibition games with the Cuban national team in Havana and Baltimore a decade ago, told The Associated Press that he hopes to so again next spring. Two groups of baseball youngsters from Florida are planning to visit next year as well.

This weekend, four teams from a Massachusetts slow-pitch softball senior league will travel to Cuba for a series of games. They’re taking equipment, uniforms and pins for the Cuban players with them.

“It’s got to help diplomacy. Sports does that,” said Stu Gray, commissioner of the Eastern Massachusetts Senior Softball Association and head of this weekend’s delegation. The association has designed a logo for the trip featuring U.S. and Cuban flags crossing over a softball. 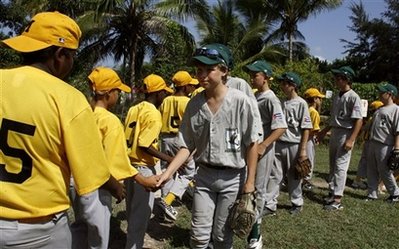 Baseball enthusiasts feel the time is right for this type of outreach. In September, the U.S. sent a senior diplomat to Havana for unannounced meetings with Cuban officials — believed to be the highest-level talks between the two nations in decades. And last month, Cuba’s foreign minister said his country is willing to hold talks with the United States “on any level.”

If Angelos gets his way, next spring his Orioles will play in Cuba, as well as host the Cuban national team, in a repeat of the exhibition games staged in 1999 during the Clinton administration. He said he decided to do so now because of the Obama administration’s overtures toward Cuba.

“Hopefully as next spring approaches, both governments will see clearer to improve the relations and make it rather easy for there to be a reciprocal arrangement,” said Angelos, a prolific Democratic donor. “Personally, I think the relations between the two countries should be clearly and emphatically re-established.”

(The article continues at http://news.yahoo.com/s/ap/20091113/ap_on_sp_ot/us_cuba_baseball_diplomacy)