A reason to watch the Cleveland Browns

Seriously, there is a reason.

You can find the full article from Yahoo! Sports at http://sports.yahoo.com/nfl/blog/shutdown_corner/post/Josh-Cribbs-walks-with-late-coach-s-son-on-his-s?urn=nfl,202608, with an excerpt below.

In a dismal year for the Cleveland Browns, wide receiver/returner Josh Cribbs has proved to be one of the only bright spots. Last month he showed he’s equally good off the field. 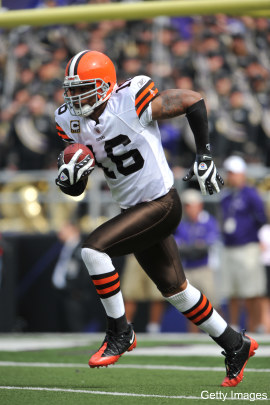 The Pro Bowler traveled to Berea, Ohio, to walk onto the field on senior night with the son of one of his former college coaches. Michael Drake, a senior receiver at Stow High School, lost his father, Mike, in 2005 to lymphoma. He had assumed he’d be accompanied by his mother and sister for senior night introductions and was stunned when he saw Cribbs arrive minutes before the game.

”I looked, then looked away, then said, ‘Why are you here?”’ Michael recalled. ”I was shocked.”

”He said, ‘Play your heart out. This is it. Give it your all. Don’t ever stop on any play. Keep pushing,”’ Michael said. ”I almost felt worried. I didn’t want to look bad for him.”

Michael’s late father recruited Cribbs to play at Kent State and served as a father figure to the D.C. native during his time at Kent. Mike Drake was the offensive coordinator for the Golden Flashes during Cribbs’ freshman and sophomore seasons. Cribbs played quarterback in college and credits Drake for helping him drive home the fundamentals that he still uses today. So, when the idea of returning for senior night was pitched to Cribbs this summer, he didn’t hesitate.

(The article continues at http://sports.yahoo.com/nfl/blog/shutdown_corner/post/Josh-Cribbs-walks-with-late-coach-s-son-on-his-s?urn=nfl,202608)