Winless on the court, winning off of it

The NBA’s New Jersey Nets are facing a multitude of issues, e.g. they are still winless, though they do have a good chance Saturday against the 2-win juggernaut that are the New York Knicks, but the team and its players, notably star guard Devin Harris, understand that their responsibilities to their fans and the community continue, no matter how bad their record at the time.

You can find the full story on Devin and the Nets at the New York Times at http://www.nytimes.com/2009/11/12/sports/basketball/12sandomir.html, with an excerpt below.

A Net Reaches Out to Fans, Wherever They Are

Nets guard Devin Harris sat at a table between the bread section and the produce aisle at a Pathmark here signing autographs and quietly representing a team that plays in New Jersey but wants to escape to Brooklyn.

Harris, the team’s starting point guard and only star, is trying to do it one local appearance at a time. 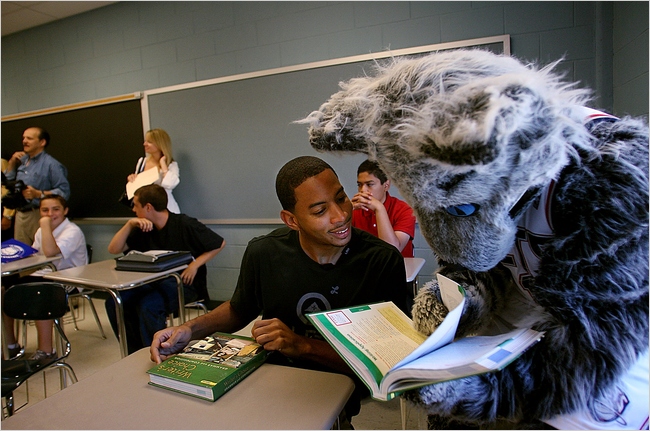 “I’ve always been a fan of being personal with fans, to see me up close, rather than just giving money to charity,” he said, as he signed his name to the small yellow picture frames given to about 50 shoppers and fans by Western Union, a Nets sponsor that invited Harris to the supermarket, where it has a money transfer outlet.

“I just like connecting with people,” he said, a rack of Bundt cakes behind his chair.

Since his arrival at the Izod Center in the Meadowlands in February 2008, Harris has told the team to keep giving him community assignments. “I try to fit everything in,” he said.

His injured groin has limited him to two of the Nets’ seven games this season, all of them losses.

While he was growing up in Milwaukee, Harris said, the Bucks’ coach, George Karl, and guard Ray Allen were models of community involvement. When he played in Dallas, his Mavericks teammates Dirk Nowitzki and Josh Howard inspired his civic work ethic.

“I learned that it’s expected of me,” said Harris, who has a foundation, 34 Ways to Assist, to help children.

His off-the-court schedule shows that he had breakfast with a hero police officer at a Dunkin’ Donuts in Hackensack, N.J., helped clean Branch Brook Park in Newark before its Cherry Blossom Festival and took a cooking class at Fabulous Foods in Moonachie, N.J., with youngsters from Big Brothers Big Sisters of Morris, Bergen and Passaic counties.