Fast start for The Courtney Walsh Foundation and C4C

The Courtney Walsh Foundation for providing opportunities for youths and meaningful changes in their lives through cricket, was launched yesterday and already has generated $11m in sponsorship.

The Foundation, which was launched at the Mona Hockey Field, received a whopping $7.5m from the British High Commission via the United Kingdom (UK) Aid and $3.5m from telecom provider LIME Jamaica. 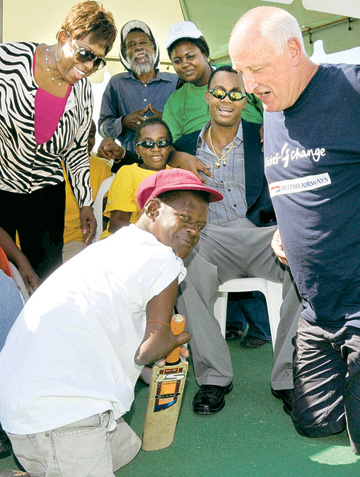 Walsh’s foundation, is a registered charity and will work in three main areas in:

There are other long-term projects which will include the establishment of a Cricket Centre to further develop the skill base of various categories in the Foundation’s programmes and the construction of infrastructural practice facilities in each adopted community.

Walsh, who said he defied doctors orders to rest from a throat ailment, thanked everyone involved in getting the Foundation up and running.

“Of course there will be challenges, but with the directors on board I am sure that we are all going to make it happen,” said the Ambassador-at-Large.

(The full article continues at http://www.cricketforchange.org.uk/news/fast_start_for_walsh_foundation)