State of mind – our most delicate asset

Last month Robert Enke, a top-level professional soccer player in Germany committed suicide at age 32. The story was shocking in part to many because Enke seemed to have the type of professional success that others would envision as perfect, i.e. pro soccer player in soccer-crazy Germany, and a projected member of the country’s national team.

In the U.S., MLB players Joey Votto, Khalil Greene and Dontrelle Willis were in the news for their struggles with anxiety-related issues last season. And this year’s AL Cy Young winner Zack Greinke of the Kansas City Royals  almost had his career derailed by a depression and social anxiety disorder.

Mental illness can be even more damaging to a player’s performance and long-term health because, due to its very nature, it is hard to see. Because of that players suffer alone, thinking that they can deal with it on their own or worse, feeling nothing can be done at all to ease their condition. And that is a major difference with a physical injury. When we see someone with conditions that incapacitate them physically, we can see it and offer to help. Such mental conditions most often do not exist.

Jerry Crasnick at ESPN.com offers an excellent story about MLB player Justin Duchscherer and his efforts to deal with his own depression and the support he has received from his friends and team. We wish Justin all the best and congratulate the Oakland A’s for their support of a member of their community.

The full article can be found at http://sports.espn.go.com/mlb/columns/story?columnist=crasnick_jerry&id=4686519, with an excerpt below.

Putting the pieces back together; Clinical depression had sent pitcher Justin Duchscherer’s life, career into a tailspin

A pitcher’s manhood is routinely defined by what he throws instead of who he really is. Does he have the self-assurance to pitch inside? Is he “man” enough to throw the breaking ball on a full count, or tough enough to go eight or nine innings and save the bullpen for the following night?

Justin Duchscherer became conditioned to view himself through the prism of wins, losses and ERA in five seasons with the Oakland A’s. But in truth, his most enduring display of fortitude came far from the pitchers’ mound, in a terminal at Phoenix’s Sky Harbor Airport in late July. 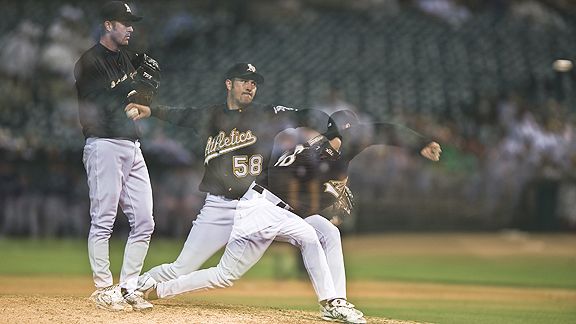 Kyle Terada/US PresswireDuchscherer was so “overwhelmed” he began to wonder if he should continue playing baseball.

The journey began with a flash of self-awareness, followed by a desperate plea for help.

While the baseball world was preoccupied with trade rumors at the July deadline, Duchscherer stayed busy completing his rehabilitation from spring training elbow surgery. After five months of doctor’s visits and solitary workouts, a part of him exulted over the prospect of taking the final step and rejoining his teammates in Oakland.

But as crunch time approached, Duchscherer’s competitive instincts gave way to a sense of isolation and despair. As he prepared to board a flight to Triple-A Sacramento for his final rehab outing, he placed a frantic call to Dr. Ray Karesky, the psychologist who runs the A’s employee assistance program.

“I was in the airport and it was time to go and I froze,” Duchscherer says. “I couldn’t even get on the plane to do something I’ve loved my whole life. You go from excited and looking forward to being back with the guys and playing ball to sitting at your house saying, ‘What happened?’

“I guess the word that best describes it is ‘overwhelmed.’ I was so confused, I didn’t know if I should retire or if I even cared about baseball anymore. I didn’t know what was wrong.”

In late August, Duchscherer revealed that he was putting his baseball career on hold to undergo treatment for clinical depression. Rather than mask his problems with a pulled hamstring or pseudo-malady, he chose to acknowledge his personal baggage and address the issue publicly.

(The article continues at http://sports.espn.go.com/mlb/columns/story?columnist=crasnick_jerry&id=4686519)