This is a great example of a Players Association leveraging their collective strength to bring awareness and resources to an effort that is further supported by the expertise at Johns Hopkins. For every pro sports league, there are a lot more alumni than current players and their input can surely be of value to sports-related, e.g. Play60 and initiatives such as Native Vision.

The full press release about the Evening With the Stars Gala can be found at http://www.nflplayers.com/user/content.aspx?fmid=178&lmid=443&pid=4570, with an excerpt below.

On Friday, Dec. 4, the NFL Players Association and Johns Hopkins Center for American Indian Health came together at the Embassy of Italy in Washington, D.C. to host the 14th annual “Evening With The Stars” Gala, presented by Bank of America.

“We believe in building a strong partnership,” said NFLPA Executive Director DeMaurice Smith. “Working hard to benefit the lives of children every day is something that will always be our vision.” 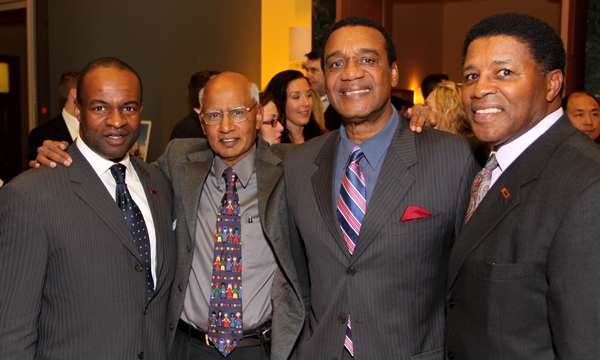 The event benefitted Native Vision, a nonprofit initiative that brings professional athletes together to help mentor American Indian youth through a variety of health and education programs. An estimated 1.3 million American Indians are currently living on reservations and suffering from poor health, low socioeconomic status and inadequate education levels. The event served to shed light on these challenges many Native Americas face, and with the help of NFL players, the hope is that awareness of these issues expands across the nation.

Emceed by former NFL great Brian Mitchell for the fifth consecutive year, the affair brought together a variety of guests eager to support Native Vision’s cause, including a number of active and retired NFL players.

“It’s a lot of fun,” said Mitchell. “Any time you can get together organizations like the NFLPA, Johns Hopkins and the Nick Lowery Foundation, you know it’s going to benefit a great cause. Bank of America has been a great supporter of this as well. They’ve had employees from Europe come and participate in camps on the reservations. Every year you see more and more people get involved. This is a full team effort.”