Puma, UNEP and the Play for Life campaign 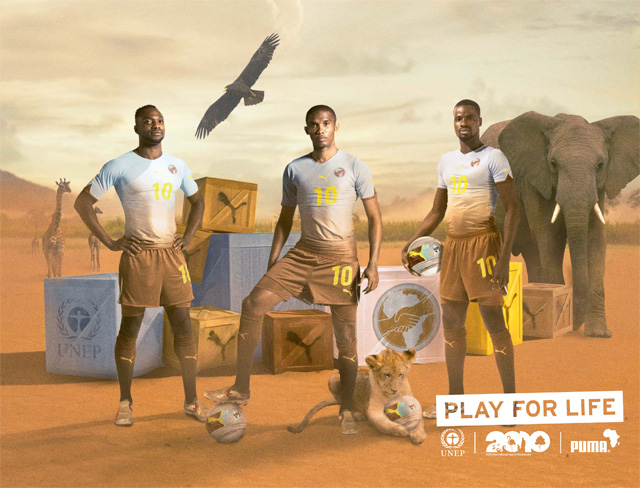 PUMA’s profits from sales of the replica fanwear for the Unity Kits will help fund biodiversity programs in Africa. The company has a host of other gear designed to generate additional funds to support biodiversity, including PUMA Unity t-shirts and PUMA Lacelets, collectable shoe laces featuring patterns from world-renowned artist Kehinde Wiley.

According to the press release, “The ‘Play for Life’ partnership will support the 2010 International Year of Biodiversity by raising awareness about habitat and species conservation among football fans and the general public during worldwide football events, including the Orange Cup of African Nations in Angola later this month and international friendly games leading up to the FIFA World Cup 2010 in South Africa. With 12 African football team sponsorships to its name and a history of innovation with Africa, PUMA is uniquely positioned to help drive this effort with UNEP…”

… “The ‘Play for Life’ campaign focuses on Africa, a continent that hosts exceptional biodiversity including two of the five most important wilderness areas on Earth – the Congo Basin, and Miombo-Mopane Woodlands and Savannas of Southern Africa. Nine of the planet’s 35 Biodiversity hotspots, the richest and most threatened reservoirs of plant and animal life on Earth, are also in Africa.”