NBA in Africa and vice versa

There have been some great players from Africa who have graced the hardwood of the NBA and many college arenas. Two that come to mind, of course, are Hakeem  Olajuwon and Dikembe Mutombo. There have been many others.

It was announced recently that the NBA is going to create a new lane, this one going from the U.S. to Africa, to complement the one that has brought the aforementioned players to this country.

The League will be opening up an office in Africa, the league’s first there. The office will be based in Johannesburg, South Africa and will be led by Amadou Gallo Fall.

Fall, a Senegal native, worked with the Dallas Mavericks for the last 12 years. 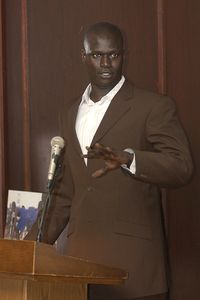 It was reported he will work with a small staff to grow participation in the game, the league’s grassroots events, the NBA Cares programs and expand its partnerships with marketing, media and consumer products companies.

Some background on Amadou: He was awarded a basketball scholarship at the University of District of Columbia after being discovered by a Peace Corps volunteer in his native Senegal.  According to Fall, “My story is a testament to the power of sports, and to sport as a tool for development.”