Hank Gathers – The Heart of a Lion

We are all-in with the NCAA basketball tournament. The first full weekend provided a lot of great action, tight games, buzzer beaters; all that which makes March Madness so special.

We highlight today and tomorrow two stories involving seminal figures in college basketball, one a player, one a coach.

The player is someone many of you may not have heard of, as Hank Gathers did his great work on the court about 20 years ago. This young man was one of the top players in all of college basketball, a man among boys when he was on the court. Well-respected by his teammates and held in awe by so many others, this East Coaster took his game, and his long-time friendship with high school teammate Bo Kimble out west to Loyola Marymount University (LMU).  Together they became the most prolific scoring duo in basketball.

Kyle Keiderling has a new book about Hank and his untimely death. The title says it all – “HEART OF A LION: THE LIFE, DEATH AND LEGACY OF HANK GATHERS.

So much is made of Hank’s death. (there is video of him collapsing on the 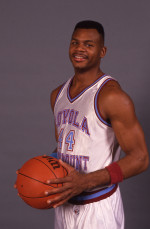 court). He did so much in 23 years and that is what should be celebrated. It may be hard to imagine a 23-year old college basketball superstar with a college degree, but that was Hank. His death came right before the NCAA tournament. The performance of his teammates during the tournament was truly special.

You can watch here a video of Hank and hear from his former teammates (and visit YouTube for even more).