In the second part of our 2-part college basketball arc, we highlight a story from Andy Katz at ESPN.com. This one involves Mike Krzyzewski, “Coach K”, from Duke University. A legendary coach, even the most casual sports fan has heard of Coach K. But this story about Krzyzewski is not about his celebrity or even his National Championships, gold medal, etc., but rather something so many of us can relate to, that is, the bond that can be formed from being involved in sports.

Andy writes about such a bond between Coach K and Ross Deutsch, a player he coached in 1997 at Michael Jordan’s basketball summer camp for adults called Flight School. The initial bond was “player and coach” but developed into so much more.

The Ross Deutsch and his family went through the unimaginable pain of losing a child to a brain tumor one year after Coach K and Ross met. From the time early in the diagnosis to Rory Deutsch’s passing and since, Coach K went from summer camp coach to lifelong friend.

The bond between Ross Deutsch and Coach K was solidified not so much by the tragedy of Rory’s death, but maybe more so by the family’s commitment to maintaining Rory’s legacy for the benefit of others through the creation of the Rory David Deutsch Foundation. No surprise that Coach K is now and will continue to be a major part of that effort.

You can read the full article from Andy Katz by clicking here. 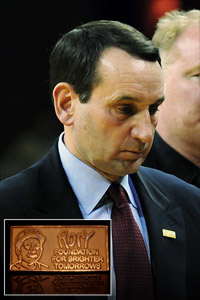