Manute Bol – A gentle giant of a man

For those of you who may not have followed college and NBA basketball in the 1980s/early ’90s, you may have not heard of Manute Bol. Manute was freakishly tall, 7’7″ and from most accounts, freakishly sweet and caring. Manute passed away this weekend. 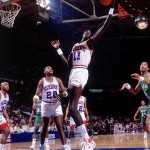 he carried himself. As some former players have stated, those on the outside may have seen someone to feel sorry for, a lost individual being taken advantage of, even being made fun of despite playing in the NBA. The players had a different take of a quiet and proud man. Charles Barkley, who certainly tells it like it is, had kind words for Manute.

Manute was a trailblazer. Before the league was populated with players from all around the world, Bol was one of the very few international players in the league. His willingness to subject himself to a world so unfamiliar to him took tremendous courage and certainly was deserved of everyone’s respect.

We will miss Manute also because he is from our generation. It is a sign of the passing of time that we lose people who, while we did not know them personally, we remember as being part of the overall fabric of our lives, especially the times of your youth. It was fun to watch Manute play. He brought something special to the game. And as a fan of basketball and sports in general, an athlete can do no better than that for people who love the game.

There were many stories about Manute’s passing over the weekend. The AP’s coverage really summed it up nicely. You can read that article by clicking here. There is also a nice video from ESPN. We did excerpt from the article a couple of the comments about Manute that give you a sense of the impact he had on so many people in and outside of the world of basketball.

“Manute’s impact on this city, our franchise and the game of basketball cannot be put into words,” 76ers president and general manager Ed Stefanski said in a statement. “He … was continually giving of himself through his generosity and humanitarian efforts in order to make the world around him a much better place, for which he will always be remembered,”

a “true humanitarian and an ambassador for the sport of basketball. “Despite his accomplishments on the court, his lasting legacy will be the tireless work and causes he promoted in his native Sudan and the cities in which he played,” the club said in a statement.”

We conclude with this picture of Manute smiling. (Ed Zurga/AP) As a basketball fan and admirer of his kind heart and his actions to make the lives of people better, we hope that this is how he is remembered. 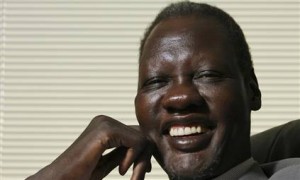