Taking the show on the road (Mets and Marlins)

Barnstorming, the idea of visiting multiple locations playing the local sports team, is a long-standing tradition. However, with the advent of professional leagues, and (mostly) stable franchises, the idea of playing teams not associated with the relevant pro league has, well, gone the way of the horse and carriage and landline phone.

With the advent of these leagues and franchises in 30 or so cities in each league, some parts of the country regularly gets to see pro teams play. But there is still a lot of the country that does not, and while they have filled some of that void with minor league teams (this is has been a great success) and emerging sports looking to avoid being completely overshadowed by the local pro sports franchises, the desire to see these pro teams, at least once or twice, is certainly there.

With this in mind, we hope that the recent games in Puerto Rico between the Florida Marlins and the New York Mets encourage teams and leagues to “take their show on the road” more often. Show other parts of the country, and other parts of the world for that matter, the beauty of your game and the passion and skill of those who play it. Develop more fans and maybe even some more consumers. 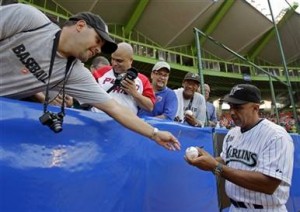 In the June 29, 2010 article by David Wadstein in the New York Times, star Mets picture Johan Santana was quoted as saying, “It’s just totally different from what you see in the United States,” Santana said. “There’s as much going on outside the stadium as there inside. You can hear the bands playing, and the fans are so into it.” Jose Reyes said about fans coming out to see them play, “These are major league clubs here,” he said. “People come to see the best in the world.”

Current society allows for overconsumption of sports content – TV, cable, satellite, radio, online, mobile phones, newspapers, magazines, etc. How much more sports can you take? Well, seeing in person the sports and athletes that you love or maybe don’t know so much about…yet, is a special experience. And that is the best type of consumption that there is. 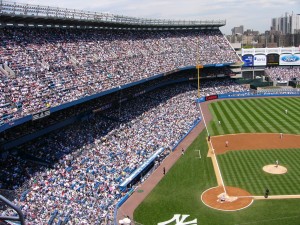