NASCAR races to the sun

Some companies, organizations and sports entities are not thought of when you hear “environmentally-friendly” or “sustainability.” By things can change and those folks can not only change, but even serve as models for future efforts.

Auto racing is one of those areas not associated the aforementioned terms. However, we have had occasion to highlight efforts by those in that world, including the IRL, F1, and NASCAR. Well, the good folks from NASCAR are thankfully at it again.

Pocono Raceway has built a solar farm adjacent to the track in one of its former parking lots. This was a major investment, a first of its kind effort in the U.S. sports market. 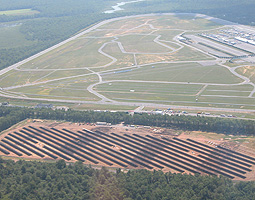 The “moral” of the story can be that one’s perception of another’s (lack of) potential to do good, to change for the better should be tempered by the hope that these others are not just capable of such acts, but highly motivated to see them come to fruition. At Pocono Raceway, they were able to do just that.

You can find David Caraviello’s full article at NASCAR.com by clicking here. An excerpt is provided below.

Pocono prepares to reap benefits of its solar farm:
Power generated will make it the world’s largest solar sports venue

The project will be more than twice as large as the second-biggest solar-powered sports facility, a stadium in Taiwan that generates about 1.2 megawatts. Igdalsky said the three megawatts produced by the Pocono facility will be converted into about 3.8 million kilowatt-hours, about 920 of which are needed to power a typical house for one month. The solar farm will also become a centerpiece of NASCAR’s green initiative, complementing recycling and carbon-offset projects the series already has in place.

The solar farm, which cost a reported $15 million to build but is expected to pay for itself in four to five years, will power the track, all ancillary buildings, a village opened last year across from the raceway, as well as a hotel and restaurant in nearby Blakeslee. Igdalsky said the facility will also produce about 40 percent more power that will be pumped into the electrical lines for community use, and will earn the raceway credits from the local power company.