By the hands of hypocrisy, the death, or at least the shaming, of college sports.

If you are watching the unfolding events in the area of collegiate athletics, you cannot be happy if you care at all about integrity, tradition, loyalty, and commitment to the development of future leaders. How can you? We are seeing an unprecedented display of hypocrisy and greed by those who have been entrusted with leading one of the most exalted institutions in this country, i.e. the university. Here is hypocrisy on full display:

“I want to emphasize that this is not a normal case of member withdrawal from an athletic conference. This is a case that involves broken commitments, secret dealings, breaches of fiduciary responsibility, the misappropriations of conference opportunities and predatory attempts to eliminate competition.”

Those words are from Mark Nordenberg and were spoken eight years ago when he accused Boston College of many of the same tactics he just employed in his university’s (Pittsburgh) departure from the Big East conference. One of his senior level college leader colleagues, Baylor University Athletic Director Ian McCaw, said, “No honor, no trust. I think there’s really a lack of honor and a lack of trust throughout college athletics right now. It’s very unhealthy. “ Ian, you nailed it. And that nail just went into the coffin holding the essence of college sports as we wish it was.

There may be questioning of how much this will really change the landscape of college athletics. There will still be the 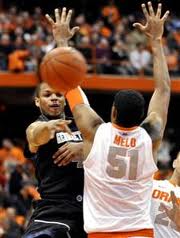 major teams, playing important games and hoping to earn championships. But that is nothing more than a dry, dispassionate look at the situation. And when it comes to sports, those words should no apply. What has transpired is the end of people’s connection with not just a particular game, but a history built on games that we often did not watch or were not even alive for. That is what sports gives us. An opportunity to be part of a history that is made ever time rivalries are continued, when new generations connect with old over the love not only for a win for their favorite team, but more importantly, a win over one of their fiercest rivals. (for example, Georgetown over Syracuse). That gift for future generations is being crossed out with the same pen that signs the new conference realignment agreements. And that is a shame.

In the The Atlantic, a seminal article entitled “The Shame of College Sports”, was just published. It incidentally came out even more this week’s flurry of activity, and gives us a much broader and deeper context by which to appreciate what just happened in college sports. You can read that piece by clicking here.