Doing for oneself and for others: College football player Eddie Delaney

We read the following short piece from Sports Illustrated on student-athlete Eddie Delaney, who plays football at the University of Albany. It was enough to want to highlight him. We then dug a little to see if there was other coverage of him. (there was). And the more we read, the more we were impressed and inspired. (and not just because he is from Long Island!) 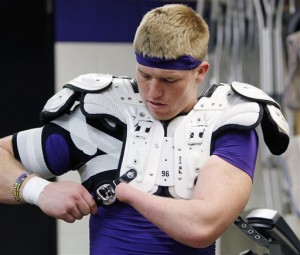 Eddie’s story is surely one of perseverance, one of living a “normal” life without restrictions, establishing an identity beyond the obvious (e.g. having one hand), etc. Each theme is worthy of coverage. But maybe the one we latched onto the most was Eddie’s desire to serve as a role model and mentor to others dealing with their own perceived limitation. Eddie’s “pay it forward” mentality is essential to make sure that individual excellence, as he has clearly shown, can be disseminated to a larger group. And for that reason, we highlight Eddie and his efforts.

Below you will find the piece from Sports Illustrated and link to a great piece by John Kekis from AP.

Albany senior Eddie Delaney, a bruising 6’6″, 250-pound defensive end, has caught the eye of some NFL scouts despite facing challenges far greater than any offered by the offenses of the Northeast Conference. Delaney, 22, is a type 1  diabetic who was born without a left hand.

“What I’m doing isn’t anything different from anyone else,” he says. “I just play football.” Delaney, a walk-on who redshirted in 2007, has blossomed into a scholarship player, a captain and the team’s sack leader. He can bench-press more than 300 pounds while balancing the bar on a nub roughly two inches wide.

Delaney, who grew up playing all sports in Holtsville, N.Y., has been diabetic since age six and has enough dexterity to test his blood sugar levels on a glucose meter that normally requires the use of two hands. “It’s about adapting,” he says.

In ’09 Delaney met a young boy from the Albany area who was also born with one hand, and they became friends. “He comes to the games,” says Delaney. “He looks up to me, and that feels good.”

Even if Delaney never gets a shot at the next level, he’s already on the highest pedestal.

For a longer piece on Eddie (we highly recommend reading it), please click here for the article by John Kekis from AP (in the Kansas City Star).