It has been an up and down year for Baylor University’s sports teams, mostly up, as their football team enjoyed a stellar season, its star player Robert Griffin III won the Heisman Trophy and its men’s and women’s basketball teams just completed great seasons (the latter group winning the national championship with a perfect 40-0 record). The down? The announcement today that the basketball program’s may have run afoul of NCAA rules.

Our focus though is on the good at Baylor. (no surprise at Sports Doing Good) And one example of the good is a student-athlete of exemplary skill, Brittney Griner. The 6-8″ player has been a marvel since high school and with expectations for her sky high in college, she has not faltered. And while you would think that everyone would be in support of a young student-athlete trying to achieve her goals, Brittney has had to endure the type of treatment we thought was long past. Evidently if a woman does well in a sport, it is because of how “guy-like” she is or how “she must be a guy.” It is similar to what has too often been the retort of those who have troubles with women taking on senior leadership roles in business and elsewhere. Questions about sexuality, jokes about how “manly” she is, etc.

It is disturbing that anyone, especially someone still so young is subject to such taunts. Thankfully her team and her coach and many others support her. And as we see in Mechelle Voepl’s great piece at ESPN.com, Brittney has developed a steely reserve that keeps her in position to achieve her goals, on and off the court. We congratulate Brittney on all of her achievements and wish her a fun senior year. 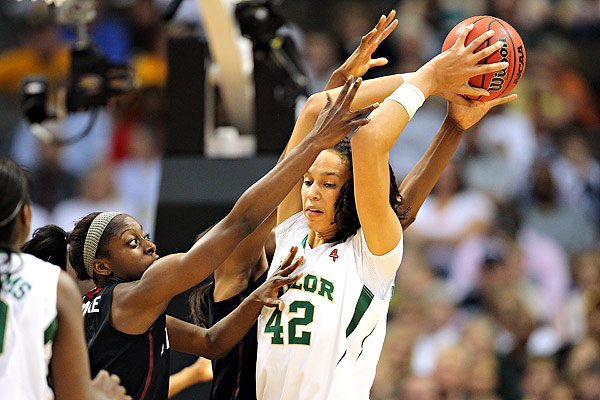