Welcome to week fifty-two of the Sports Doing Good newsletter.

This week’s newsletter comes to you from the great city of Louisville. We had the honor over the past two days of meeting with leading practitioners and academics involved with athletes and social change. This inaugural conference was hosted by the Muhammad Ali Center. This was the perfect venue, both in terms of physical layout, and emotional connection. The Center is a wonderful building housing great exhibits, along with a number of open arenas for meetings and dialogue. The conversation was lively, grounded, and motivating. We are proud to send our one-year anniversary newsletter from such a stirring venue and city.

Congratulations must go out to Eli Wolff (Brown University), Dr. Mary Hums (University of Louisville) and Marcel Parent (Muhammad Ali Center) for creating and running an event that addresses such powerful messages and is infused with great potential for athletes, organizations, events, non-profits, and society at-large. We invite all of you to visit the Ali Center and certainly to attend next year’s “Athlete and Social Change Forum.”

Solidarity in Sport Website is Live!; A Platform for Inclusion, Equality and Dignity in Sport
The Solidarity in Sport Pledge (SISP) is a global grassroots movement to promote equality in sport.  The pledge emphasizes inclusion, equality, and dignity for all athletes.  By joining forces we are using our collective voice to stamp out exclusion, inequality, and stigma. We seek to make this change now!
http://www.solidarityinsport.org

A world of courage and connection; Team IMPACT unites sick kids and college athletes with the power of teamwork
For Londell Francis, there was no team like the Blackbirds of Long Island University-Brooklyn. After all, as the effervescent 8-year-old with sickle cell anemia will be the first to tell you, he is a Blackbird — having signed his letter of intent through Team IMPACT in the fall.
http://espn.go.com/boston/story/_/id/9094798/team-impact-unites-sick-kids-college-athletes 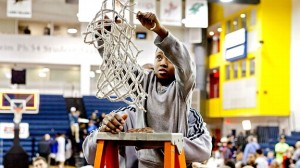 Courtesy of Long Island University-Brooklyn.  Londell Francis, 8, who has sickle cell anemia, cuts the nets with his LIU-Brooklyn teammates.

Overweight man gains internet fame with amazing soccer skills
Internet video of 50-year-old Andrew Cassidy juggling a soccer ball has garnered the overweight man instant fame. The footage, originally posted to Facebook, shows Cassidy artfully manipulating a soccer ball at the Milford Haven Docks in Pembrokeshire, Wales. The video has received over 26,000 shares on Facebook and over 2 million You Tube views since the posting and dubbed Cassidy a “Welsh Maradona.”
http://news.yahoo.com/video/overweight-man-gains-internet-fame-202639410.html
Video – http://youtu.be/W-lQyn17AWI

Sarah Cronk invites athletes of all abilities to cheerleading through nonprofit called “The Sparkle Effect”
When she was just 15 years old, Sarah Cronk helped her cheer team in Bettendorf, Iowa, defy age-old stereotypes by creating a squad that welcomed students with disabilities. The success of that team inspired her to found The Sparkle Effect, a nonprofit that boasts nearly 100 inclusive cheer teams at schools across the country.
http://espn.go.com/espnw/9104156/espnw-sarah-cronk-invites-athletes-all-abilities-cheerleading-nonprofit-called-sparkle-effect 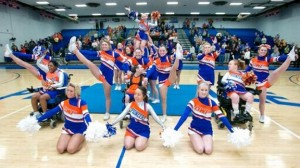 The Pioneer Sparkles have won a lot of fans and taught a lot of lessons at the University of Wisconsin-Platteville campus and beyond.

A year after heart surgery, Jeff Green wins game with heart-pumping play
The Celtics forward scanned the crowd all game, searching for the man he said he owes everything to, the man responsible for Green even playing here, in the NBA, on a Wednesday night, collecting millions to play the game he loves. And then Green found him, Dr. Lars Svensson, the man who performed open-heart surgery on Green at the Cleveland Clinic nearly a year ago.
http://www.boston.com/sports/basketball/celtics/2013/03/27/jeff-green-makes-another-buzzer-beating-basket-help-celtics-slip-past-cavaliers/Lb4oDu0TKPG0pf72IecDBM/story.html?s_campaign=8315 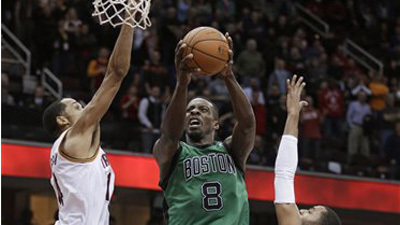 Major League Baseball (MLB) donates $10 million to Welcome Back Veterans
Nearing the five-year anniversary of the apolitical organization’s inception, this backing brings MLB’s total commitment to Welcome Back Veterans to $23 million. Welcome Back Veterans is an initiative of MLB Charities and the Robert R. McCormick Foundation, helping men and women make a successful transition to civilian life when their service to their country has ended.
http://mlb.mlb.com/news/article.jsp?ymd=20130325&content_id=43295858&c_id=mlb 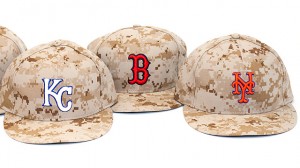 Budding jockeys, paddlers join Peace and Sport 2013 forum (April 23-24)
The regional movement for Peace through sports gained more momentum when the Peace and Sport Dubai Forum 2013 organising committee joined hands with the A’ayan horse riding club for women and children. The promotional campaign after a series of events recently will see the Forum being organised in Dubai for the first time on the April 23 and 24.
http://www.khaleejtimes.com/sport/inside_sport.asp?xfile=/data/nationsports/2013/March/nationsports_March342.xml&section=nationsports

NFL draft prospect Menelik Watson globe trots, dabbles in basketball before finding ‘natural’ fit
As Watson spoke in his thick British accent, Trickett learned he was from a blighted, drug-filled neighborhood in Manchester, England; that he played football for only a few weeks; and that three months before he had never heard of the line of scrimmage, or knew how to wear a helmet or make a block.
http://sports.yahoo.com/news/nfl–nfl-draft-prospect-menelik-watson-globe-trots–dabbles-in-basketball-before-finding–natural–fit-015845154.html 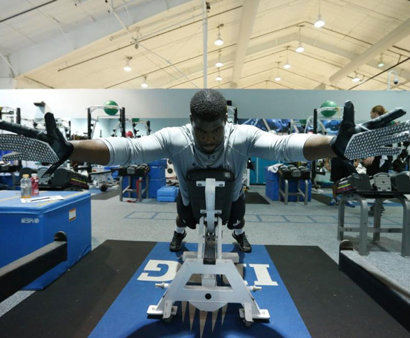 Menelik Watson works out in preparation for the NFL draft. (IMG) 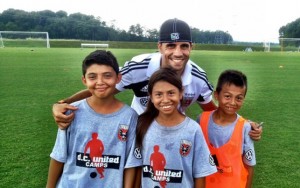 Spurs General Manager R.C. Buford, Alexis Wangmene, and the NBA’s efforts in Africa
“There’s tremendous passion for basketball among boys and girls,” Fall said recently. “We are coming here and bringing in the expertise, but at the same time making the game accessible was the first order of the day. We’re very pleased with where we are with awareness and also more countries and more young people being aware of the NBA’s presence on the continent.”
http://www.grantland.com/story/_/id/9066882/spurs-general-manager-rc-buford-alexis-wangmene-nba-efforts-africa 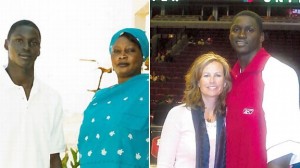 Robbie Rogers reaction opens door for out athletes
Rogers’ greatest surprise in the five weeks since his soul-baring post hasn’t been the one that he sprang that day by revealing that he is gay. It’s been the surprising reaction that instantly came boomeranging back at him once he did.
http://espnfc.com/blog/_/name/espnfcunited/id/4400?cc=5901 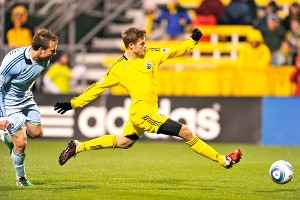 Jamie Sabau/Getty Images.  Robbie Rogers, who played for the Columbus Crew from 2007 to 2011, would be welcome on an MLS roster. 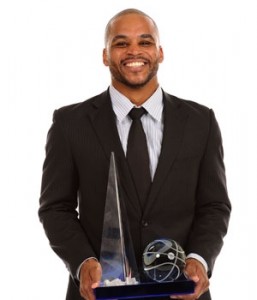 Washington Capitals Volunteer with The Salvation Army’s Grate Patrol Program
The Alzners and Schultzes served meals, distributed Caps blankets and spent time with citizens served by Grate Patrol at four of the program’s seven nightly stops within the northwest neighborhood of Washington, D.C. Launched in 1985, Grate Patrol operates 365 nights a year, serving 150 meals each evening and more than 33,100 meals annually within D.C.
http://capitals.nhl.com/club/news.htm?id=662598

Kazmir Gets Headlines as Indians’ Fifth Starter, And Dylan Axelrod Earns Same Job With White Sox
Axelrod’s ascent from being the 927th draft choice in 2007 is ironic in that the right-hander was in Windy City all along—emerging in ’09 from the Frontier League’s Windy City ThunderBolts of Crestwood, IL, mere miles from where he will pitch on the south side of Chicago. “It’s a great feeling,” Axelrod told MLB.com.  “I’ve been working toward this for a long time. It’s been a dream of mine to be a starting pitcher in the major leagues. So I’m getting a great opportunity obviously. I’m going to try to run with it.”
http://seamheads.com/2013/03/28/kazmir-gets-headlines-as-indians-fifth-starter-and-dylan-axelrod-earns-same-job-with-white-sox/

Sueño MLS 2013 – Presented by Allstate registration now open
The wait is over for hundreds of aspiring young soccer standouts as registration opens for Sueño MLS 2013 – Presented by Allstate, the premier, nationally televised search for the best undiscovered soccer talent in North America.
http://sports.yahoo.com/news/sue%C3%B1o-mls-2013-presented-allstate-145559122–mls.html 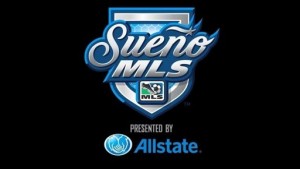 First Women’s soccer team for Giving Children Hope Initiative
This year Giving Children Hope Initiative celebrated Women’s Day by launching a first ever women’s soccer team in the region with more than 40 girls. They not only started their first ever women’s soccer team, but they also launched two new women’s groups in their program to better reach out to the community and had speakers come out addressing major issues on sexual harassment and gender based violence.
http://coachesacrosscontinents.org/2013/03/21/first-womens-soccer-team-for-giving-children-hope-initiative/ 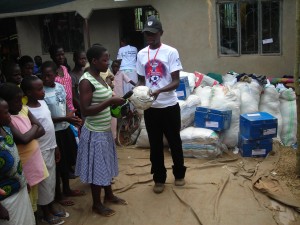 Sport and the pursuit of happiness
The international community is increasingly recognising that ‘progress’ should not be measured solely in financial terms. Sport can play a role in improving a society’s overall sense of well-being.
http://www.sportanddev.org/en/newsnviews/news/?5486/1/Sport-and-the-pursuit-of-happiness 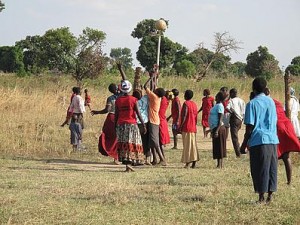 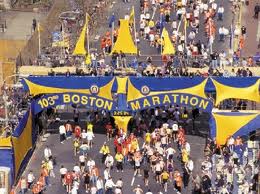 British Cycling launches plans to get 1 million more women into sport
Widely praised for boosting grassroots participation while also delivering spectacular elite success at the Beijing and London Games, there is a hope among the sport’s administrators and government officials that it can now help tackle long-standing issues preventing more women from taking more exercise.
http://www.guardian.co.uk/sport/2013/mar/25/british-cycling-more-women-plans 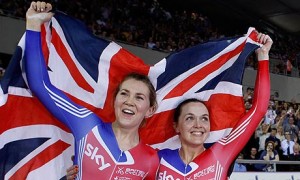