Welcome to week fifty-five of the Sports Doing Good newsletter.

There have been few weeks in recent memory that were as emotionally trying as this past week. Especially for those in Boston, but also for others all around the country, the reality of life literally shook us from our normal day-to-day routine, a routine that often involves us watching and/or participating in sports.

The Boston Marathon bombings were a stark reminder about the evil that resides in some. It also featured the good in a greater number of others, those committed to helping their fellow citizens even during the most trying and scary times. We saw resilience in so many and dogged determination to bring to justice those who seek to unsettle our way of life.

The loss of life and the damage done to those injured are more than difficult to accept. We love sports, we love participating in spots, we love to watch sports, and we love to cheer each other on. That is partly what the Boston Marathon represents. The bombings of the past week should not diminish in any way the value we find in such honored and cherished events. Instead, we must remain committed to providing everyone opportunities to seek the best in themselves. For when that is done, we show that we can persevere and come out of any tragedy a stronger and more unified society.

We are proud to feature the stories below as they again represent the best in us. As Bill Iffrig demonstrated the moment after the bombing, we may get knocked down but we will be there for each other so that we can finish the race.

Bill Iffrig, 78, knocked down by Boston Marathon bombing but finishes race
The blast knocked the Lake Stevens, Wash., resident to the ground, and he was soon surrounded by police and race officials — a moment captured by Boston Globe photographer John Tlumacki in a now-famous image of the first terrifying moments of the attack.
http://msn.foxsports.com/other/story/bill-iffrig-knocked-down-by-blast-but-78-year-old-runner-unharmed-041613

Gym class pairs second-graders with special-needs students
Pairs of students bounce balls back and forth, race scooters and crawl through tunnels. They are physically active, but this is not a typical gym class. It is Peer PE, a physical education program at Middletown Primary School that pairs second-graders with students who have special needs. The program was launched last school year and recently received an award for its efforts.
http://tinyurl.com/ccsqqng 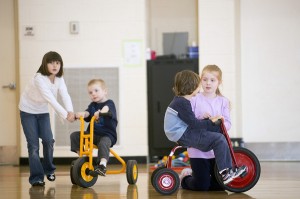 Todd Frazier Promises Home Run To Autistic Bat Boy, Then Delivers Against Marlins
Before Frazier went up to the plate he had some words with Ted Kremer, the Reds’ bat boy. Kremer, who is autistic, had special motivation for Frazier. “[Kremer] said, ‘come on man, hit me a home run. I love you.’” Frazier recalled after the game. “And I said ‘I love you, too. I’ll hit you one. It was great how excited, that look, I started smiling before I even hit home plate.” On the second pitch of the at-bat, Frazier delivered on his promise.
http://www.thepostgame.com/blog/good-sports/201304/todd-frazier-called-his-shot-against-marlins 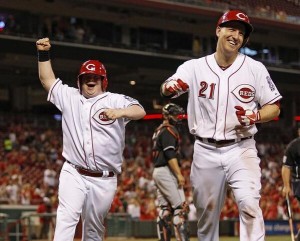 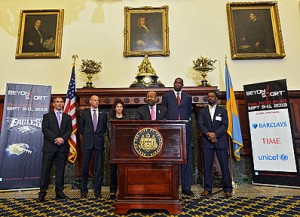 All Heart: Nick Newell is ready for the UFC, but is Dana White ready for a one-handed fighter?
Nick Newell circles to his right, in a southpaw stance, as XFC lightweight champ Eric Reynolds sizes him up. Though undefeated, Newell is the underdog in this December matchup — but he’s not about to fight like it. He fires leg kicks, then head kicks. When Reynolds presses, Newell, a former Connecticut all-state wrestler, latches onto his waist. Now the fight is in his world.
http://espn.go.com/mma/story/_/id/9175420/is-one-handed-fighter-nick-newell-ready-ufc-espn-magazine 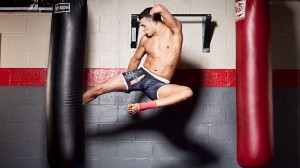 Cole Barash for ESPN.  Newell hopes White will see him as fighter with precise kicks and a loaded right hand.

Bob Wolff: Broadcaster’s Trove Is Calling All Ears
Wolff’s curiosity sustained him for 15 years in this city, and many more elsewhere in a professional journey that wound through Madison Square Garden and continues today for News 12 Long Island. His 74-year career is the longest in sports broadcasting history, as certified by Guinness World Records.
http://www.nytimes.com/2013/04/17/sports/baseball/bob-wolff-a-broadcaster-who-saved-his-work-has-much-to-share.html?hp&_r=1& 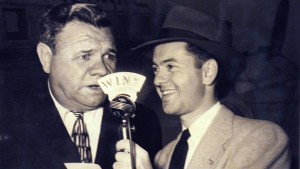 During a 74-year career as a sportscaster, Bob Wolff collected his interviews with some of the best-known athletes in the United States. Now he is donating the collection to the Library of Congress.

R.A. Dickey’s incredible journey featured on 60 Minutes
It’s not often 60 Minutes focuses on an active ballplayer for something good that has happened as much off the field as on. Dickey’s autobiography, Wherever I Wind Up: My Quest for Truth, Authenticity and the Perfect Knuckleball, is the basis for CBS’s interest, as is Dickey’s recent charity work for Bombay Teen Challenge, an organization that aids teenage sex workers in Mumbai, India.
http://www.thestar.com/sports/bluejays/2013/04/13/ra_dickeys_incredible_journey_featured_on_60_minutes.html 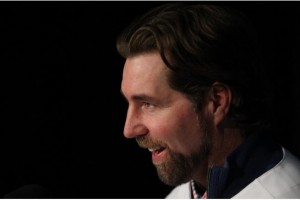 NFL Players are Joining the Nature Team (From Bonfire Impact)
The NFL Players Association (NFLPA) and National Park Trust (NPT) have joined forces to promote this year’s Third Annual National Kids to Parks Day on Saturday, May 18th. Last year more than 108,000 kids and families participated. With the help of high profile national partners like the NFLPA, National Park Trust hopes to double participation in 2013.
http://www.bonfireimpact.com/2013/04/18/nfl-players-are-joining-the-nature-team/

Gay Pro Athletes Get Backing of Nike, NHL as Sponsors Await
“They made it clear to me Nike would embrace it,” Welts, 60, now president of the National Basketball Association’s Golden State Warriors, said in a telephone interview. “The player who does it, they’re going to be amazed at the additional opportunities that are put on the table, not the ones that are taken off.”
http://www.bloomberg.com/news/2013-04-11/gay-pro-athletes-get-backing-from-nike-to-nhl-as-sponsors-await.html 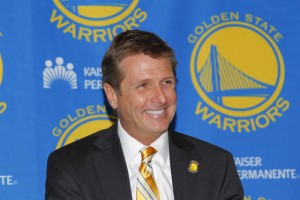 RallyMe: Crowdfunding for the sports fan in all of us
A Rally is the term for the campaign that an athlete, team, or organization creates using RallyMe’s state-of-the-art platform tool. The Rally clearly states the athlete’s goal and provides the mechanism to raise the funds to make it happen. A Rally consists of videos, text, photos and audio.
https://www.rallyme.com/about

’42′ smacks $27.3-million home run in debut, crushing ‘Scary Movie’
Those who saw “42″ this weekend loved it, assigning the film a rare perfect average grade of A+, according to market research firm CinemaScore. That’s great news for Warner Bros. Nearly every film that has earned an A+, including such movies as “The Avengers” and “The Help,”  has gone on to become a commercial hit.
http://www.latimes.com/entertainment/envelope/cotown/la-et-ct-box-office-42-scary-movie-20130414,0,7996076.story

Sport, a motor for development and social inclusion
Sport and Cooperation Network’s conference in Madrid on 11-12 April encouraged dialogue about issues of social inclusion and the power of sport in a development context.
http://www.sportanddev.org/en/newsnviews/news/?5558%2F1%2FSport-a-motor-for-development-and-social-inclusion 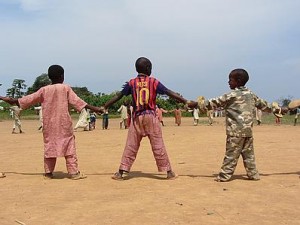 Linsanity: Jeremy Lin’s rise to stardom (60 Minutes feature)
There aren’t many basketball stars who step off the bench and directly into the dictionary, but that’s what happened last season when a third-string guard for the New York Knicks named Jeremy Lin spawned something so new, so crazy, so outside the realm of rational explanation that it demanded its own word: Linsanity.
http://www.cbsnews.com/8301-18560_162-57578300/linsanity-jeremy-lins-rise-to-stardom/ 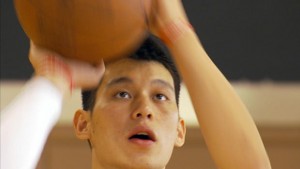 Magic, Chase and Operation Homefront Team Up to Surprise Military Family with Mortgage-Free Home during Fan Appreciation Night
“My reaction (to being awarded the house) was the same as my wife – we were just shocked,” Jack said. “I think something like this shows that the Magic and other sports teams put a lot into supporting the military. They always seem to give back to us. A lot of the sports teams have come over to (the Middle East) and toured over there and met with us to help boost morale. I think it’s great all that they do for us.”
http://www.nba.com/magic/news/magic-chase-and-operation-homefront-team-surprise-military-family-mortgage-free-home-during-fan 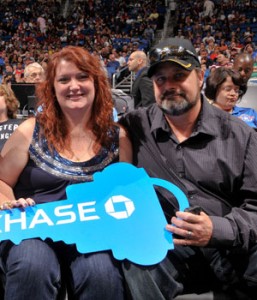 MLB’s 2013 Honorary Bat Girl Contest (submissions until April 22)
Fans are encouraged to share inspirational stories that they or loved ones may have or currently are experiencing that provide hope and motivation in the fight against breast cancer, as well as the reasons they or their nominees should represent their favorite team. Entries can be submitted by men and women who are breast cancer survivors, advocates and/or supporters of the cause at honorarybatgirl.com, a website powered by MLB.com, and will be accepted until the submission period closes on April 22 at 12:01am ET.
http://mlb.mlb.com/honorarybatgirl/2013/index.jsp 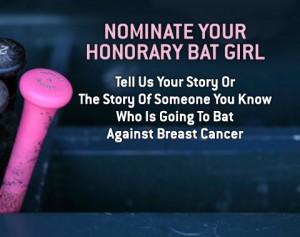 National Association for Sport and Physical Education to Induct Olympian Edwin Moses Into Its Hall of Fame
Moses currently serves as the Chairman of the U.S. Anti-Doping Agency (USADA) and Chairman of The Laureus World Sports Academy, an association of sporting legends, which uses the positive influence of sport as a tool for social change around the globe.  NASPE will bestow the honor at the organization’s Hall of Fame Banquet on Friday, April 26.
http://www.aahperd.org/naspe/advocacy/mediaCenter/pressReleases/olympian-edwin-moses_-hall-of-fame.cfm 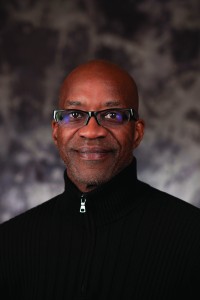 A tourist family’s ups and downs in traumatized Boston
The Jumbotron flashed the “Boston Strong” slogan, and “the whole crowd sang the national anthem in unison,” Randy says. “It’s something my kids will never forget … to see how a city reacts” after such a devastating event.
http://www.usatoday.com/story/dispatches/2013/04/19/boston-tourists-experience-a-stay-after-the-boston-marathon-blasts-and-lockdown/2096491/ 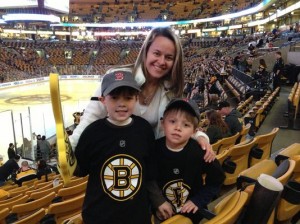 Ripken foundation hosts summit on preventing abuse of child athletes
The Orioles Hall of Famer enlisted his foundation and the National Center for Missing and Exploited Children to draft guidelines using the research and input of leading sports scientists, pediatricians and advocates for screening coaches and volunteers. The goal is to empower child athletes and expose predators.
http://articles.baltimoresun.com/2013-03-19/entertainment/bs-md-safe-to-compete-20130319_1_sexual-abuse-child-athletes-orioles-coach-and-manager 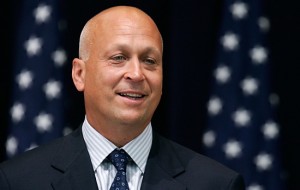 Calling all Coaches: Join Former Seahawks QB Jon Kitna and CBS Sportscaster James Brown to Devise Game Plan to Better Mentor Young Athletes
Coaches from Seattle-area middle and high schools, colleges and universities, and community leagues are invited to attend a free training session on May 7 to learn how to develop, mentor and lead young men and help build their character. The Verizon Foundation and A CALL TO MEN – a leading national violence prevention organization – will bring the final installment of their national training series, entitled A Call To Coaches: Your Voice Counts, to CenturyLink Field in Seattle.
http://www.prnewswire.com/news-releases/calling-all-coaches-join-former-seahawks-qb-jon-kitna-and-cbs-sportscaster-james-brown-to-devise-game-plan-to-better-mentor-young-athletes-203705051.html

RIP: Pat Summerall. Former NFL Player, Iconic Broadcaster Dies At 82
Summerall played 10 NFL seasons from 1952 to 1961 with the Chicago Cardinals and New York Giants, but it was in his second career that he became a voice familiar to generations of sports fans, not only those of the NFL.
http://www.huffingtonpost.com/2013/04/16/pat-summerall-dead-nfl-broadcaster_n_3094988.html?utm_hp_ref=sports