Welcome to week one hundred twenty-one of the Sports Doing Good newsletter. This week’s 10 stories include:

Introduction
One of the cooler things about doing the Sports Doing Good newsletter is seeing an individual or organization make repeated appearances. It speaks to their consistency in effort and their commitment to “doing good” on a regular basis. There are so many wonderful stories out there that sometimes we admittedly just don’t have room to feature those ongoing efforts. (don’t fret, that may change!)

A “follow-up” that we do have this week involves former Division 1 basketball player and now aspiring coach Natalie Nakase. In one way, Natalie’s story is not that unique – she is a former player who wants to coach. We have seen that before. However, Natalie is committed to teaching men’s basketball, and men’s professional basketball at that. In week 31, we first took a look at Natalie’s ambition and initial efforts to achieve her goal of coaching in the NBA. This week, we can an update on Natalie’s efforts.

Other stories we are happy to feature this week include: a beautiful story of Noah Aldrich, his 6-year-old sibling, Lucas; the recognition of dozens of NCAA scholar-athletes who are also leaders in the community; the growth of Elizabeth Adhiambo from young fighter to Commonwealth Games competitor, an interesting look at Eibar, the David in the Goliath-world of premier level soccer in Spain; an amazing act of generosity by German star soccer player Mesut Ozil; former NBA star Alonzo Mourning’s elevation to Laureus Ambassador; the NHL’s integrated and comprehensive effort to be a leader when it comes to environmental sustainability; head football coach Chuck Martin taking on a tough job on the college level with supreme confidence that he can turn it around; and the presence of Ji Cheng, China’s first cyclist in the world’s most demanding bike race, the Tour de France.

Boy Carries His Younger Brother Through Triathlon, Wins At Life
According to a blog about Lucas on the family’s Caring Bridge page, doctors diagnosed Lucas with lissencephaly shortly after he was born. The rare condition, which the National Institutes of Health attributes to “defective neuronal migration during embryonic development,” is often accompanied by seizures, greatly reduced motor function and a shortened lifespan. Undeterred, Noah is intent on squeezing as much life into those years as he can. He told Boise’s Fox 9 he decided to compete in the triathlon with Lucas because his brother doesn’t typically get to participate in sports. “[Most of] the time when I play sports he has to just watch,” Noah said. “I just want to finish with Lucas.”
http://www.huffingtonpost.com/2014/07/22/disabled-brother-triathlon-idaho-photos_n_5610510.html 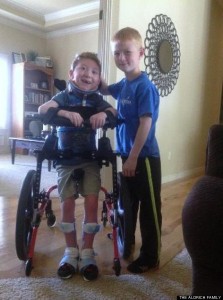 Aiming at Glass Ceiling, but Not With Her Jump Shot; Clippers’ Nakase Aspires to Be N.B.A.’s First Female Head Coach
Nakase, the Clippers’ assistant video coordinator, is trying to earn credibility in the coaching profession the same way: by proving her worth. She landed a spot as an assistant coach on the Clippers’ bench during the two-week N.B.A. Summer League here, a first according to the Clippers and a step toward her goal of becoming an N.B.A. coach — something no woman has ever accomplished. “I don’t want to just coach,” Nakase said. “I want to win championships.”
http://www.nytimes.com/2014/07/21/sports/basketball/clippers8217-nakase-aspires-to-be-nba8217s-first-female-head-coach.html?ref=sports&_r=0 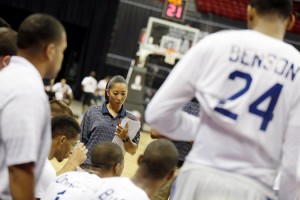 Allstate, American Football Coaches Association Announce Record-Breaking 182 Nominees for 2014 Allstate AFCA Good Works Team®
For 23 years the Allstate AFCA Good Works Team® has served as one of the most coveted and prestigious off-the-field honors in college football. The award recognizes players whose charitable involvement and community service contributions stand out among all other student-athletes participating in the sport…Since its establishment in 1992, the award has existed to pay tribute to the “good” in college football that extends beyond the wins and the losses. While balancing academics and athletics, this select group of student-athletes nominated by their respective colleges and universities has committed their limited free time to having a lasting impact on their communities.
http://www.allstatenewsroom.com/channels/News-Releases/releases/allstate-american-football-coaches-association-announce-record-breaking-182-nominees-for-2014-allstate-afca-good-works-team

Boxing for Kenya, from grassroots to Commonwealth Games
First introduced to boxing by sport and development organisation Boxgirls International, Elizabeth Adhiambo from Nairobi is a living success story, having gone on to compete in the London 2012 Olympics. sportanddev took the opportunity to catch up with her as she makes final preparations for this year’s Commonwealth Games.
http://sportanddev.org/en/newsnviews/news/?7122/1/Boxing-for-Kenya-from-grassroots-to-the-Commonwealth-games%20%20%22 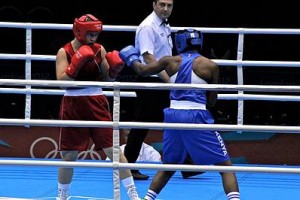 Tiny Soccer Club Promoted to Take on Spain’s Giants
It has required more than just victories for tiny Eibar to join La Liga, Spain’s top division, and earn the right to challenge Kroos and his Real Madrid teammates or Messi and his fellow Barcelona players. After winning promotion in late May from the second division, Eibar faced a race against the clock to raise 1.72 million euros, or $2.32 million, and meet regulations on how much capital a top-division club should have. It closed its capital raising on Monday, two weeks before the Aug. 6 deadline, after selling €1.98 million worth of shares to fans.
http://www.nytimes.com/2014/07/24/sports/soccer/eibar-a-rare-debt-free-team-in-la-liga-faces-stiff-challenges.html?ref=sports 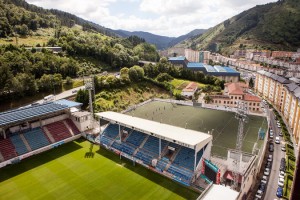 The Ipurúa stadium is being expanded to comply with a rule that clubs joining La Liga have 15,000 seats within two years. Credit Markel Redondo for The New York Times

Mesut Ozil donates World Cup winnings so 23 children can have surgery in Brazil as ‘personal thank you for the hospitality’
Ozil’s generosity is part of the BigShoe project, whose ‘goal is to help children’. It started at the 2006 World Cup in Germany when money was collected for a child that required surgery, and the project has escalated from there. The charity was part of the 2010 World Cup in Africa, and the tradition carried to 2014.
http://www.dailymail.co.uk/sport/worldcup2014/article-2695152/Mesut-Ozil-donates-World-Cup-winnings-23-children-surgery-Brazil.html 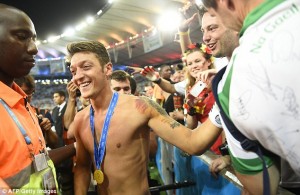 Upping the total: Ozil originally paid for 11 to have surgery but made it 23 to honour the full Germany squad. AFP/Getty Images.

Future NBA Hall of Fame Inductee Alonzo Mourning Welcomed as a Laureus Ambassador by Edwin Moses
The Laureus Ambassadors, along with the members of the Laureus World Sports Academy, support the Laureus Sport for Good Foundation. The organization’s mission is to utilize the power of sport to address social problems through a global program of sports-related community development initiatives. Laureus USA works with numerous organizations around the country to help support initiatives that affect youth such as access to quality coaches and mentors, furthering education, and increasing physical activity and health awareness.
http://www.laureususa.com/?q=news/future-nba-hall-fame-inductee-alonzo-mourning-welcomed-laureus-ambassador-edwin-moses 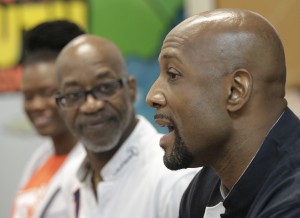 NHL Dropping the Gloves Against Global Warming
The “coolest game on earth” is facing off against global warming. In a North American major sports first, the National Hockey League released a comprehensive Sustainability Report on Monday assessing the league’s impact on the environment and the steps its teams have taken to reduce their carbon footprints. The findings, according to the Natural Resources Defense Council’s Allen Hershkowitz, amount to nothing less than “the single most important document about the environment ever produced by a professional sports organization.”
http://www.usnews.com/news/articles/2014/07/21/nhl-unveils-first-league-wide-sustainability-review 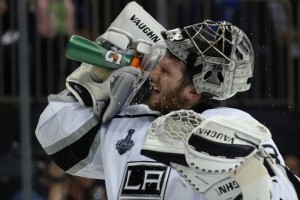 Los Angeles Kings goaltender Jonathan Quick squirts water on his face during the 2014 Stanley Cup Final at Madison Square Garden in New York City. The NHL is trying to reduce its water consumption.

Why Chuck Martin took a pay cut to coach one of college football’s worst programs
So Martin took less money, and a far lower paying job than he likely could’ve found, to put his white-hot career on the line trying to turn around a horrible football team in a low-profile, yet highly-competitive conference. And yet all he can talk about is how great it’s going so far and how even greater it’s going to be. “That’s part of that is the allure in doing this,” he said. “A reporter came up to me after I took the job and honestly asked me, ‘Do you think you can get this turned around?’ “And I said, ‘Based on my last job and my last pay, if I can’t then I am the dumbest person on the planet.”
http://sports.yahoo.com/news/why-chuck-martin-took-a-pay-cut-to-coach-one-of-college-football-s-worst-programs-053856988-ncaaf.html 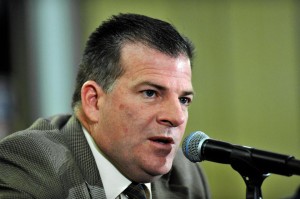 Chuck Martin talks to the media during a press conference. (USAT)

Last Over All in the Tour, but Blazing a Trail
He is, however, neither embarrassed nor bothered about being in last place. It is, Ji said, part of a plan. Mountain stages, days when his team leader, Kittel, will not be anywhere near the front to fight for the finish, he takes it easy to preserve energy for the flat days when he leads the Tour’s entire pack of riders. His only job on climbs is to make sure that everyone on his team avoids missing the time limit. “I’ve really taken them easy,” he said of the Alpine stages. “Maybe I lost 20 minutes: That’s O.K., because I really need to relax to prepare for what’s coming.”
http://www.nytimes.com/2014/07/22/sports/cycling/tour-de-france-2014-ji-cheng-is-tours-first-chinese-rider.html?src=me 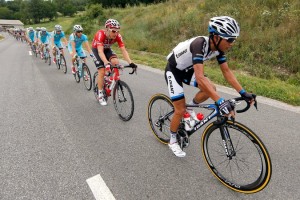 Ji Cheng trails the leader of the Tour de France by more than four hours. He has also raced in the Vuelta a España and the Giro d’Italia. Credit Kim Ludbrook/European Pressphoto Agency