Welcome to week one hundred thirty-two of the Sports Doing Good newsletter. This week’s 10 stories include:

Introduction
The title of one of the stories we feature this week includes the phrase, “Good Guys Finish 1st.” We like that alteration of the long-standing idea that “nice guys finish last,” because we see examples every week of that opposite being true. Stories include individuals overcoming personal and societal obstacles, groups working to better the condition of those in their community and around the world, and teams/leagues interacting with their fans in new and creative ways. This week was no different.

One of the most heart-warming stories that you will ever see involves 5-year old JP Gibson and the NBA’s Utah Jazz. The Jazz have followed the lead of other pro teams and colleges who have gone much further than providing a signed jersey or a chance to meet one of their favorite athletes. It has often become a full-day experience, including a press conference, participation in a practice or game, and then a showering of gifts for the individual and his/her family. These stories reflect an evolution of the thinking when it comes to the importance of sports teams and individuals to many fans. They are part of who we are. They are almost like family and nothing says family like spending time together and having a good time. JP Gibson definitely was and is a member of the Utah Jazz family.

Other great stories we have this week include: a profile of college football coach Hugh Freeze; a groundbreaking effort led by the wonderful students at Cal-Berkeley; the passion of legally blind Adrianna Kenebrew for her favorite sport, gymnastics; NC State Wolfpack freshman student-athlete Abdul-Malik Abu’s commitment to faith and basketball; research that helps support the theory that sports participation is valuable for everyone, including those girls who become business leaders; the amazing gesture by the Haitian national soccer team for their sisters from Trinidad and Tobago; and one writer’s take on the great career and impact of professional soccer player Landon Donovan; amongst other stories.

Utah Jazz’s 5-year-old free-agent signee steals the show
Gibson was an immediate fan and player favorite from the moment he stepped onto the court in his green uniform. He was given a standing ovation — from fans and players — during the introductions. He easily won the Rookie Dance-Off against Dante Exum and Rodney Hood, delighting onlookers with his moves. The small toddler then charmed the crowd while doing warm-up exercises and stretches with the Jazz. As a grand finale, the Jazz subbed Gibson into the game for the last play of the scrimmage. After taking the inbounds pass, Gibson brought the house down with some sweet dribbling moves to get by Dante Exum and Steve Novak. Once he made it into the lane, the spunky 5-year-old received a helpful assist from 7-foot-1 center Rudy Gobert for the best slam dunk of the night.
http://www.deseretnews.com/article/865612539/Utah-Jazz-sign-5-year-old-with-leukemia-to-special-contract.html 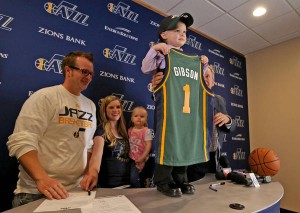 Five-year-old free agent guard JP Gibson stands on the table with his uniform after signing a one-day contract with the Utah Jazz. Gibson, who was diagnosed with acute lymphoblastic leukemia in 2012, joins the Jazz on the bench for tonight’s open scrimmage at EnergySolutions Arena, Monday, Oct. 6, 2014, in Salt Lake City. Tom Smart

Good Guys Finish 1st: The Hugh Freeze Story
“Hugh is the total package,” says Mississippi athletic director Ross Bjork, sitting in a cafeteria that overlooks the indoor practice facility. “He’s personable, charismatic, he plays a style that kids love—fast on offense, aggressive on defense—and everything about him is family. He tells his assistants to bring their kids to work. No one does this in college football. But recruits see this family atmosphere he’s created, and recruits see that Hugh has got an ‘it’ factor that few coaches possess.”
http://bleacherreport.com/articles/2216102-good-guys-finish-first-the-hugh-freeze-story?utm_source=cnn.com&utm_medium=referral&utm_campaign=cnn-sports-bin&hpt=hp_bn15 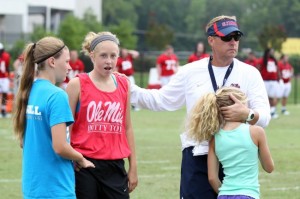 New athletic team breaks barriers for the disabled
UC Berkeley’s newest sports team may be small, with just seven players, but it carries a big distinction – it’s the nation’s first competitive college athletic team for blind students. Chancellor Nicholas Dirks congratulated the co-ed Cal goalball team at its class last Friday and presented the student-athletes – and a service dog, Van Dyke – with their uniforms. “You’re setting a new moment in history,” he told the players, before watching their practice in a Recreational Sports Facility gym. He praised them for having “the will and the courage” to forge a new path in higher education for student-athletes with disabilities.
http://newscenter.berkeley.edu/2014/09/22/new-athletic-team-breaks-barriers-for-the-disabled/ 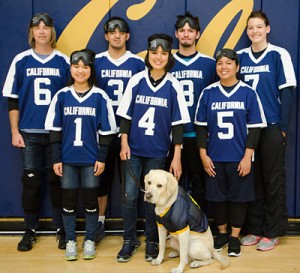 Somali leaders make case for more youth programs
Hani Haybe recently faced the skeptical mother of a player on her coed soccer team. The mother had just heard that several young Somali-American women left the Twin Cities to help the militant group ISIL’s fight in Syria and Iraq. Was this soccer team really just about soccer? “Your daughter will be safe,” Haybe, the coach, told the mother during a half-hour of grilling. “We’re not recruiting kids to go overseas.” In fact, some Somali community leaders are arguing that programs such as Haybe’s are a key line of defense against attempts to recruit young people locally. They have seized on reports that local youths have left to aid the Islamic State in Iraq and the Levant to make a case for more funding for after-school and athletic programs for Somali youths.
http://www.startribune.com/local/minneapolis/277017471.html 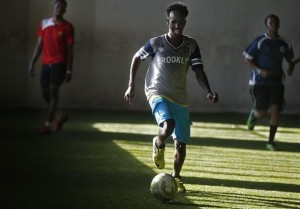 Legally Blind Gymnast Crushes Sport Without Special Treatment
The gym is one of the only places where there are no real accommodations for her. Everything is the same. She gets on the same balance beam as everybody else,” her mother Asha Kenebrew told Today.com. “I don’t know, but I think that may be why she loves the sport.” Adrianna may be legally blind, but she has an incredible vision for herself. She hopes to become the first visually impaired athlete to win an Olympic gold medal in gymnastics, and last year received a Female Athlete of the Year award in her region. “I just think of it as my vision making me work harder for what I’m trying to accomplish,” she told Fox26.
http://www.huffingtonpost.com/2014/10/07/blind-girl-pursues-gymnastics_n_5939556.html?ncid=fcbklnkushpmg00000019&ir=Sports 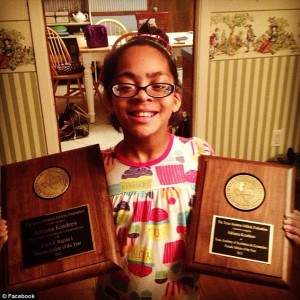 Winning attitude: Adrianna, who was named 2013 Female Athlete of the Year for her region by the Texas Amateur Athletic Federation, says her disability makes her work harder

NC State’s Abu juggles faith, hoops; Wolfpack freshman Abdul-Malik Abu’s unique challenge has made him stronger
Abu, fortunately, has experienced little in the way of discrimination in his life. If anything, it’s been more sideways glances from people who, he said, “expect me to look a certain way, and I don’t look like that.” He’s tried to counter even the smallest of snubs with patience, taught early by his parents that overreacting will only exacerbate a problem. “They told me, coming here [to the United States] was an opportunity to do great things,” he said.”They didn’t want me to take that opportunity for granted. I think if people have questions about my religion, it’s my duty to answer them. At least they have the curiosity.”
http://espn.go.com/mens-college-basketball/story/_/id/11654537/north-carolina-state-freshman-abdul-malik-abu-learned-how-juggle-religion-basketball 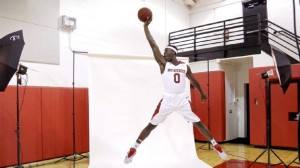 Female executives say participation in sport helps accelerate leadership and career potential
Ninety-four percent of the respondents have participated in sport and close to three-quarters (74%) agree that a background in sport can help accelerate a woman’s leadership and career potential. Close to two-thirds (61%) say that past sporting involvement has contributed to their current career success and that a background in sport has a positive influence on their own hiring decisions, with more than two-thirds (67%) highlighting a background in sport as a positive influence on their decision to hire a candidate.
http://www.ey.com/GL/en/Newsroom/News-releases/news-female-executives-say-participation-in-sport-helps-accelerate–leadership-and-career-potential 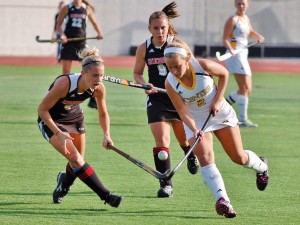 Haiti bail out Trinidad-Tobago women’s team from financial crisis
His posts went viral quickly. The soccer website KeeperNotes.com reached out to Waldrum and by Wednesday night had collected just over $9,300 for the team via a PayPal account. Jen Cooper, who runs KeeperNotes, said because of the overwhelming response the site had to stop taking donations because of tax implications. Haiti’s team also heard Waldrum’s plea from its training camp in South Bend, Indiana. The team had been running on donations and money raised from T-shirt sales and other fundraising. It had $1,316 in its account.
http://www.espnfc.us/trinidad-and-tobago/story/2080436/haiti-bails-out-trinidad-tobago-womens-team-from-financial-crisis 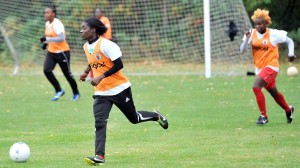 Haiti’s women’s team came to the rescue when they heard about the plight of their rival from Trinidad-Tobago.

UEFA marks fight against discrimination
At stadiums throughout Europe, and with the support of many players from across the world, the message will be conveyed that racism, discrimination and intolerance can have no place in the game. UEFA is giving its full support to Europe’s largest anti-discrimination campaign – the Football People action weeks, organised by UEFA’s long-standing partner in the fight against racism, the FARE network. From 9 to 22 October 2014, at 40 matches across UEFA’s prestigious club competitions and at 54 European Qualifiers, UEFA’s commitment to ensuring that European football is free of racism, intolerance and xenophobia will be emphasized through a series of activities which will be witnessed by thousands of fans in the stadiums, and millions more on television.
http://sportanddev.org/?7484/1/UEFA-marks-fight-against-discrimination

This year, the UEFA EURO 2016 qualifying matches (‘European Qualifiers’) and the matches in the UEFA Champions League and UEFA Europa League offer a high-profile platform for the campaign against discrimination in football.

How Landon Donovan became my U.S. soccer hero
I was, and still am, a part of that first generation of modern American soccer fans. We are the first ones who grew up with the game, a league and a competitive national team. Donovan was the face of that game, that league and that national team. He was the face for all of us — the constant. On Friday, Donovan will bid farewell to the team that made him a star as a teenage brat, left him buried four years later as a man who failed a country and then made good on it all, taking it to untold heights in South Africa. He will also say goodbye to us, the generation that grew up with him, and he with us.
http://www.sbnation.com/soccer/2014/10/10/6950863/landon-donovan-usa-ecuador-last-match
(Video, http://youtu.be/ChuABNQOotM)