Welcome to week one hundred thirty-three of the Sports Doing Good newsletter. This week’s 10 stories include:

Introduction
An idea that is often associated with sports both serves to motivate participants but also scare them as well…and sometimes simultaneously. The idea? Expectations. We are driven often by expectations that question our abilities, our commitment, and/or determination. We take this doubt about achievement and spur ourselves to seek our goals, to even go farther that we thought we could. We reject the normal standards and try to prove that as an individual and as a society, we can do more.

But expectations can also instill fear as individuals are expected to overcome things clearly beyond their control and which create challenges sometimes being addressed for the first time. Naturally, there is doubt about meeting those expectations and achieving success. And this doubt can become even more debilitating when more and more people are viewing the situation (e.g. fans and pro athletes).

What we saw with several of the stories this week were those feelings of motivation and fear by those in sports. We saw it with the story of Alex Zanardi, a world class CART and F1 driver who lost his legs in a race accident but has persevered to achieve wonderful success again as a driver and handcyclist, and now as a triathlete; a new teaching style that has young people improving their physical health while building their intellectual skills; an approach by a coach that seeks to develop the whole person and not just the “champion athlete” that seems to cloud the judgment of many parents; a surprising act by a professional baseball player that surpassed the expectations of a loyal fan; a boxer who is literally fighting to ensure the health of his daughter; a tremendous act of sportsmanship that defies common expectations about how competitors deal with each other; and the performance of a hometown kid who does not have “superstar” traits but has helped a team long-viewed with low expectations to have visions for a successful future; amongst other stories.

No legs, all heart: Alex Zanardi completes the Ironman at speed
Zanardi, who turns 48 on Oct. 23, is no stranger to grueling events. Since losing both his legs, he partook in the 2007 New York City Marathon and won gold medals in hand-cycling at the Paralympic Games back in 2012 in London. On top of this, Zanardi is still racing professionally, driving in the high-profile Blancpain Sprint Series in a BMW Z4 GT3 equipped with hand controls for the brake and throttle. (He went back to racing within two years of his accident.) Zanardi completed the IRONMAN this past Saturday in 9 hours, 47 minutes, 14 seconds — good enough for 272nd overall among the 2,187 athletes who completed the course within the 17-hour time limit. But to the Italian, it wasn’t about the position, it was about going the distance — seeing it through, no matter what difficulties he encountered.
https://autos.yahoo.com/blogs/motoramic/alex-zanardi-is-now-an-ironman–proving-legs-will-never-beat-heart-164550278.html 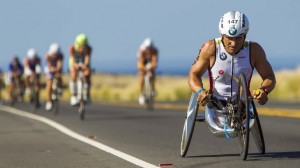 This School Has Bikes Instead Of Desks–And It Turns Out That’s A Better Way To Learn
The Read and Ride program at Ward began five years ago. One classroom is equipped with enough exercise bikes for a full class of students, and teachers bring students throughout the day to use them. As they ride, they read. The combination burns calories, but it turns out that it also helps students learn better. As the elementary school analyzed testing data at the end of school year, they found that students who had spent the most time in the program achieved an 83% proficiency in reading, while those who spent the least time in the program had failing scores–only 41% proficiency.
http://www.fastcoexist.com/3036607/this-school-has-bikes-instead-of-desks-and-it-turns-out-thats-a-better-way-to-learn 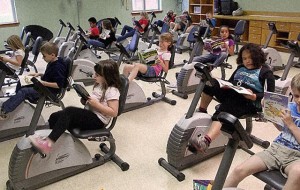 My Secret: I Don’t Coach to Win Championships (from Up2Us)
I coach a team of 10-11 year old girls for a dedicated volleyball club in New York City.  Parents bring their girls, ages 10-18, to this club with the intention of winning tournaments and signing scholarships.  I’ve even had parents of my 11 year-old players pester me about their college recruitment.  What my players, parents and club directors don’t know is that as a coach, I don’t aim to create championship 11-year old volleyball players.  I aim to create a positive sports environment and act as a mentor for my players when they need one. I use the sport my players and I both love as a tool to build and instill the characteristics and traits that create great 11-year old girls, and here are the secrets on how to do it:
http://up2usblog.org/?p=1345 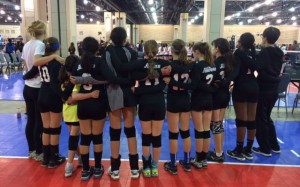 Laureus project leaders at Global Summit share and learn their lessons in a day out at school
Staged with the support of Malaysian charitable foundation Yayasan Rakyat 1Malaysia, the Laureus Global Summit brings together representatives from these programmes to exchange knowledge, ideas and share expertise on sport for development. The activities included basketball, football and lifesaving, each demonstrated by the project from around the world which uses that particular tool to engage young people. The Academy Members took a leading role in the action…The Laureus Sport for Good Foundation has been working with YR1M since the Laureus World Sports Awards were held in Kuala Lumpur last March. The two organisations will co-operate over the next three years to develop projects which will use sport to improve the lives of young people in Malaysia and leave a legacy for the country following the Awards.
http://www.laureus.com/news/laureus-project-leaders-global-summit-share-and-learn-their-lessons-day-out-school 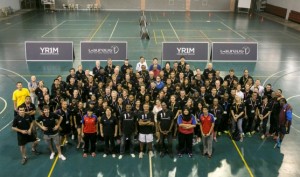 Brandon Finnegan gives ALCS Game 4 tickets to ‘broke Royals fan’ over Twitter
“It’s unbelievable,” Finnegan said with a laugh. “I don’t regret it; I definitely should have just messaged him, quietly though: ‘Yeah, you can have a couple tickets.’ If I could, I’d give tickets to all of the fans who ask for one.”… “It’s been a blessing to be here,” Finnegan said. “I don’t know how long I’ll be here, you know? It’s not a given that I’ll be here next season. So I might as well make it last, and make it as much fun as I can while I’m here. That was part of doing it; part of it was giving someone what they wanted. “It’s humbling. Everybody should stay humble. You’re not always going to play this game. That’s why I take full advantage of it.”
http://sports.yahoo.com/blogs/mlb-big-league-stew/brandon-finnegan-gives-game-3-tickets-to–broke-royals-fan–over-twitter-213827866.html 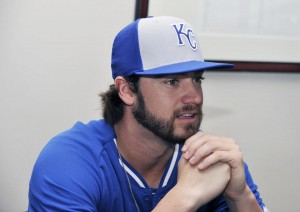 Steve Cunningham: Fighting for Her Life
Kennedy will be ringside Saturday night, watching her father fight for her life. The bout, at Philadelphia’s 2300 Arena, is far from Pittsburgh, but the Cunninghams have a plan to charter a flight if they get the call for the transplant during the bout. Until then, she’ll pass the days with schoolwork and Nickelodeon and computer games, with occasional intermissions to sing Beyoncé songs on a home karaoke machine. At night, just before bed, she usually pulls out her iPad. She Googles her father and pulls up one of his marquee wins — Krzysztof Wlodarczyk, Marco Huck, Amir Mansour. Only Saturday, against Natu Visinia, the action will be live, the violence will be real. “I don’t like the part where he gets knocked down,” she says. She does, however, like the part where he gets back up.
http://grantland.com/features/fighting-for-her-life-steve-cunningham-boxer-daughter-heart-transplant-tyson-fury-tomasz-adamek-heavyweight/ 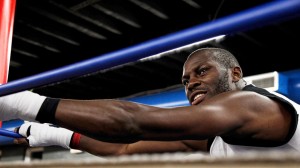 Now that’s sportsmanship: Cross country runner CARRIES fellow competitor across the finish line after she badly injures her leg
Melanie Bailey, a senior at Devils Lake High School, was running in the Eastern Dakota Conference’s Cross Country Championship when she spotted Danielle LeNoue lying on the ground sobbing in pain. Miss LeNoue, a senior at Fargo South High School, had fallen just 800 meters from the finish line after feeling a ‘pop’ in her left knee, which turned out to be an injury to her patella tendon. While dozens of runners had sprinted past her, Miss Bailey stopped to help, before lifting her rival on to her back and carrying her over the finish line in an incredible act of compassion.
http://www.dailymail.co.uk/news/article-2797458/touching-moment-north-dakota-cross-country-runner-carries-competitor-finish-line-badly-injures-leg.html 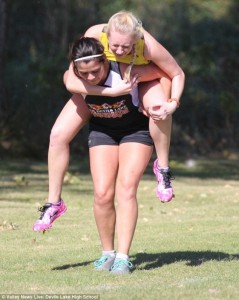 Act of compassion: Melanie Bailey, a senior at Devils Lake High School, is pictured carrying Danielle LeNoue, a senior at Fargo South High School, toward the finish line after she badly injured her leg in a race

A Hometown Hero in a Cleveland Shadow; Johnny Manziel’s Presence Hangs Over Browns Starter Brian Hoyer
“If you ask around, people are kind of happy that it’s a hometown guy who’s out there,” said Chuck Kyle, who is in his 32nd season as the St. Ignatius head coach. “He’s gone through all the things with the Browns, all the ups and downs,” Kyle said. “The fans know it means something extra to Brian.” And as a Cleveland native, Hoyer is acutely aware — painfully aware — of what a winning season would mean. He knows the hunger and frustration Browns fans feel, and how their emotions rise and fall season to season, and sometimes quarter to quarter.
http://www.nytimes.com/2014/10/18/sports/football/johnny-manziels-presence-hangs-over-browns-starter-brian-hoyer.html?ref=sports&_r=0 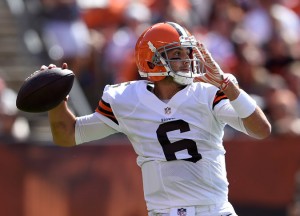 Of the N.F.L.’s 32 starting quarterbacks, only Brian Hoyer, who grew up across the city line from Cleveland in Lakewood, Ohio, actually hails from the city in which he plays. Credit Jason Miller/Getty Images

Negro Leagues museum in Kansas City tells long-ignored stories of great baseball players
O’Neil was one of the most beloved baseball men in Kansas City, one of this city’s last links to its proud baseball history. A former player and manager for the Kansas City Monarchs, O’Neil was the co-founder of the Negro Leagues museum and its greatest ambassador until his death in 2006. His seat at Kauffman Stadium where he used to watch Royals games, situated behind home plate, is given to one person each game who embodies O’Neil’s spirit for community service.
http://www.baltimoresun.com/sports/orioles/blog/bal-negro-leagues-museum-in-kansas-city-tells-longignored-stories-of-great-baseball-players-20141015-story.html#page=1 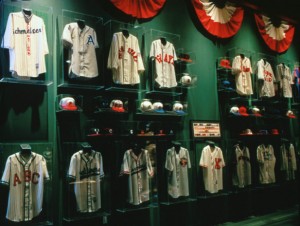 Using football to educate girls: Franz Gastler & Kusum Kumari at TEDxGateway
Franz grew up in Edina, Minnesota, and has been living in India since 2007. In 2008, he co-founded Yuwa, an organization that uses girls’ football to combat child marriage, illiteracy and human trafficking in the rural regions of Jharkand. Franz and Yuwa have won awards from Nike Gamechangers, Yahoo, Barclays, Times Now, NDTV and Ashoka Changemakers, and have been featured in countless media including BBC, Bloomberg Businessweek, Times of India, Hindustan Times, Outlook, The Hindu, Indian Express, Mint, CNN-IBN, Tehelka, People Magazine and others.
http://empoweringwomenandgirls.tumblr.com/post/98585399728/franz-gastler-franz-gastler-co-founder-and
(Video, http://youtu.be/BJ2elbOGPCg)