Welcome to week one hundred fifty-five of the Sports Doing Good newsletter. This week’s 10 stories include:

Introduction
We have a couple of folks making another appearance in the Sports Doing Good newsletter. Young athlete Mo’ne Davis and baseball legend Derek Jeter are once again leveraging their respective notoriety and influence to do good in service of others. In both situations, there may be large groups who will be impacted directly, in the short term and maybe in the long-term as well. One of stories includes someone not so famous who was recognized for an act that directly does not influence a lot of people, but surely got people talking about the importance of sportsmanship.

Mahmoud Za’tarah had an opportunity to score a goal in a club game but seeing an injured opposing player, kicked the ball away so the player could be attended to. The reaction on the field and around the world mostly was one of appreciation and support. There was also debate whether the player would have done this if there was more at stake, i.e. his team was not winning with a few minutes left. Za’tarah was clear that his actions were in no way dependent on the score. It was all about sportsmanship and respect for the opponent. While the player is not world famous, it is great to see his act “go global” and get so many people talking.

Other stories we are happy to feature this week include: soccer icon Seamus Malin and Coaches Across Continents; MCAS Miramar Youth Sports Program; the Fossil Ridge, CO unified basketball team; the Denver Broncos’ Von Miller “Vision Day”; the Northeastern University basketball team and one of their biggest supporters; the global importance of women’s involvement in sports; and the winning ways of the NBA’s best team, the Atlanta Hawks.

Mo’ne Davis launches shoe collection that benefits impoverished girls
Partnering with M4D3 (Make A Difference Everyday), Mo’ne created an entire collection of sneakers, some of which feature the Taney Dragons blue-and-burgundy color scheme, for children and women. Proceeds from the sale of Mo’ne’s sneakers will go to benefit Plan International USA’s Because I am a Girl initiative, which seeks to aid girls living in poverty in developing countries. “Designing shoes with M4D3 is exciting and I wanted to support Because I am a Girl to help girls and give them a chance at a better future,” Mo’ne said in a press release about the sneaker collection launch.
http://www.philly.com/philly/blogs/style/Mone-Davis-launches-shoe-collection-benefits-impoverished-girls.html#2VQjjHMSB1pBbfG3.99

Soccer Icon Seamus Malin Heads to Tanzania
But this April and May, Seamus is taking his role as a Board Member with Coaches Across Continents to the next level.  Seamus is headed On-Field to work with our partner programs on Unguja and Pemba islands, Tanzania. Here Seamus will work with our partners as they harness the true power of sport for social impact, tackling such issues as corporal punishment which is still legal and practiced there and female empowerment.  Seamus will help these local communities address their cultural and traditional problems so that they can choose their own future through sport…Seamus is looking for your support of Coaches Across Continents in Tanzania, and has targeted the ambitious goal of $27,000 which is the cost and value of one year-round partnership.
http://coachesacrosscontinents.org/soccer-icon-seamus-malin-heads-to-tanzania/ 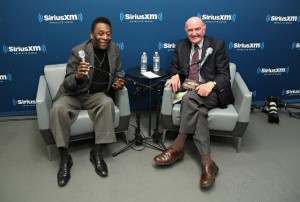 Seamus says, ‘together we can help children in developing regions around the world play soccer, learn life skills and become leaders in the community.’

Meeting families’ needs: MCAS Miramar (Calif.) a two-time Excellence in Youth Sports Award winner
“Our staff takes great pride in serving military families,” said Sheron Jones, youth sports director at MCAS Miramar Youth Sports Program. “This motivates us to provide world class customer service to our families and take initiative to assist them, especially during a parent’s deployment.” Through youth sports, military families are able to connect with others who are going through the same experience and build a support system while members of their families are away. “Our youth sports program strives to provide a variety of sports in a fun atmosphere so that families can enjoy themselves and participate in healthy activities,” Jones said.
http://www.nays.org/article/11128-Meeting-families%27-needs:-MCAS-Miramar-%28Calif.%29-a-two-time-Excellence-in-Youth-Sports-Award-winner?utm_source=March+2015+-+NAYS+update&utm_campaign=March+2015+General+Newsletter&utm_medium=email 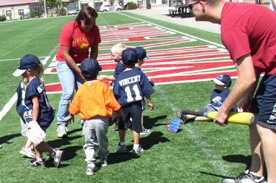 This award reassures our staff that what we are doing truly matters and we are making an impact every day on the families and children we serve.”

Fort Collins unified basketball draws smiles, crowds
As outgoing as Peter can be, ironically he has to be coaxed into taking a shot, which he is encouraged to do while participating on the Fossil Ridge unified basketball team. Fort Collins, Poudre and Rocky Mountain high schools have similar teams that join students with and without cognitive disabilities as part of Project Unify with the Special Olympics. Unified games have become a must-go event at high schools in Fort Collins. On game days, students at the schools make a social media push to get their friends to attend, and some of the games have drawn student crowds that exceed attendance at varsity events — like the time 1,500 fans attended a recent Fossil Ridge-Rocky Mountain Unified matchup.
http://www.coloradoan.com/story/sports/2015/03/04/fort-collins-unified-basketball-draws-smiles-crowds/24400881/?hootPostID=[%27[%22[\%274b9c11844480e2d174767cf998fbf62c\%27%22]%27] 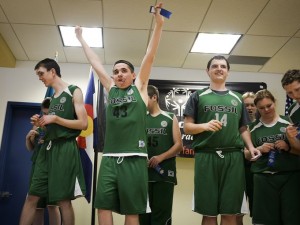 Denver Broncos’ Von Miller Hosts Von’s Vision Day, Provides Eye Screenings for Over 170 Underprivileged Children
The foundation saw 171 children ages 5 through 19 from local organizations like Boys and Girls Club, Elevate and Big Brothers Big Sisters. 146 of those children, or 86%, tested in need of vision correction. Those individuals were able to pick out their new frames on site. Von will personally distribute their new prescription glasses at a pizza party celebration at Sports Authority Field at Mile High Stadium in a few weeks. Optometrists also detected one attendee with a life threatening disease. “It’s incredible when you think about those numbers,” said Jeff Lees, optician of The Optical Centre Longmont and member of Von’s Vision Executive Board. “To think that many of these children have never seen an eye doctor, with the kind or prescriptions we’ve been seeing, this will change their lives.”
http://vonmiller.org/blogpost.aspx?ID=1025 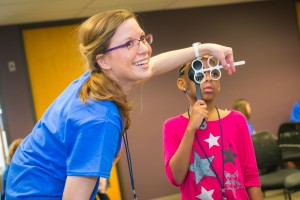 16-year-old has special presence on Northeastern team
Which is why, when the Huskies gather for Thursday’s NCAA Tournament opener against Notre Dame, Max is expected to take his usual spot with his teammates. That’ll be Max, in his wheelchair, at the end of the bench, cheering. “He’s an official team member,” Northeastern coach Bill Coen said. “We had a national letter-of signing for him, he’s been a part of the team, he comes to practice — snow days included — he’s in the locker room pregame, postgame. He wins and loses with us.” Inclusion for someone with disabilities can boost confidence and self-esteem. It can help establish an identity. In Max’s case, it can also improve the health of a young boy who already has spent far too many of his nights in a hospital room.
http://www.bostonglobe.com/sports/2015/03/17/northeastern-players-draw-inspiration-from-teammate-max-plansky/nT4du7TY9ehLBumtKz6D9K/story.html 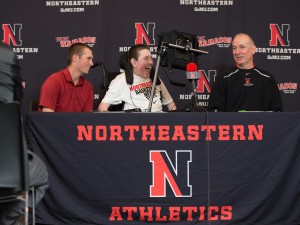 Women’s participation in sports key to boosting gender equality – UN
The event – entitled ‘Looking ahead: the place of sport for women’s empowerment post-2015’ and held on the margins of the ongoing 59th session of the Commission on the Status of Women (CSW) – underscored sports’ multidimensional role in enhancing women’s broader community engagement. Sports programmes, the UN Women chief noted, can both fill gaps in basic nutrition and health care, bring together those who would otherwise be isolated, and tackle head-on the ever-present scourge of gender-based violence by dismantling the stereotypes of women as less capable than men. Panelist and Olympic ice skating champion Michelle Kwan agreed, telling those in attendance that the inclusion of women in athletic activities was “not about giving a girl a ball with which to play, but about giving a girl a chance to dream.”
http://www.un.org/apps/news/story.asp?NewsID=50342#.VQjde-HQOtu 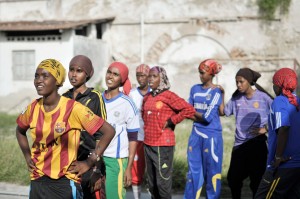 Girls line up during a basketball drill in Mogadishu, Somalia. UN Photo/Tobin Jones 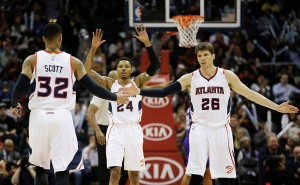 The Hawks’ Mike Scott (32), Kyle Korver (26) and Kent Bazemore after Scott dunked on a breakaway against Sacramento on Monday. Dg/Associated Press

Jeter arrives in Japan for charity baseball game
Former major league teammates Derek Jeter and Hideki Matsui will take part in a charity baseball game to support survivors of the 2011 earthquake and tsunami in Japan – and Jeter repeated a desire to own a team someday. Participating in the game at Tokyo Dome on Sunday will be a group of student baseball players from the Tohoku region that was devastated by the 2011 disaster that killed more than 15,000 people. Profits will go toward helping children in the region. Jeter and Matsui will also put on a baseball clinic and take part in a home run derby.
http://sports.yahoo.com/news/jeter-arrives-japan-charity-baseball-game-052555576–mlb.html 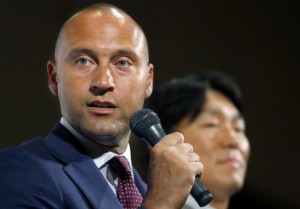 Za’tarah: “I would do it again if we were losing”
The Al-Wehdat striker has become a global icon of sportsmanship after a video went viral of him kicking the ball out of bounds after seeing an opposing player injured, despite being clear through on goal. The incident sparked worldwide debate as his team was up 2-0 at the time in the closing minutes of their match against Al Nahda of Oman in the Asian Cup. They went on to win 3-0. “I would do it again whatever the score is,” the young player said. “It is one of Al-Nashama’s characteristics to respect the opponent regardless of the result. Fair play is always our message.
http://www.sportanddev.org/en/newsnviews/news/?12231%2F1%2FZatarah-I-would-do-it-again-if-we-were-losing 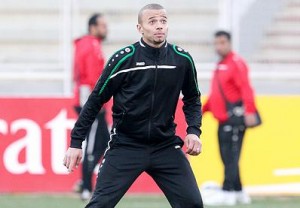