Welcome to week one hundred sixty-four of the Sports Doing Good newsletter. This week’s 10 stories include:

Introduction
In over three years of doing the newsletter we have featured a few instances of the overlap of sports and entertainment and doing good, often captured in humorous acts. It is not that this overlap does not take place. It pretty much happens on a daily basis. (We love you Shaq, Kenny, Ernie, and Chuck!) But the examples are quick and often things that we end up promoting on Facebook or Twitter. This week, however, we have a reason to feature sports and entertainment as captured by 33 years of exceptional work by late night television host David Letterman.

Letterman, very much a participant in the sports world through his IndyCar Racing team, was also a huge supporter of the industry by regularly including athletes, announcers and others who made their living in sports. Yes, he was there to help publicize their successes, but he also had them to humanize them, to make them relatable, and of course, to make them funny. His gift to find that sense of humor and fun in almost everyone is what separated him from many others in his line of work. So this week we are happy to highlight a story that takes a look at just a few of the many sports interviews and skits involving the legendary talk show host.

We are also pleased to feature these other great stories, including: the launch of a powerful effort by the worldwide leader in sports; an effort to grow the world’s most popular sport in the 2nd largest country on the planet; a life-altering trip to Haiti for a group of college student-athletes; a previously featured blind high-school pole vaulter who this year reached one of her major goals; a look at 5 game-changing and society-improving NBA players; a first-of-a-kind effort for young girls and tackle football; a demand for higher standards when it comes to selecting future hosts of the Olympic Games; a group of women leveraging the power of football to improve their lives; and the beginning of a winning streak for a university baseball team after more than 4 years of losing.

Sport promotes social good: ESPN launches a new corporate citizenship strategy
We believe that everyone should have the opportunity to play sports and be able to take advantage of its many benefits. ESPN is working with nonprofits to develop sports curriculum, distribute sports equipment and create safe spaces to play sports. We’re also finding ways to foster physical development, leadership and life skills through sports. We’re working with others who share this vision, and together hope to make sports more accessible, especially to those in underserved communities. We are all privileged to work in such a dynamic, exciting industry, and hope to share our success and use our platforms to build and inspire communities through the power of sports.
http://www.espnfrontrow.com/2015/05/sport-promotes-social-good-espn-launches-a-new-corporate-citizenship-strategy/ 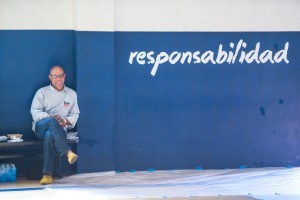 John Abraham: the Bollywood star making football big in India
Abraham, who co-owns NorthEast United, is at the forefront of a group of Indians who are trying to crack what is football’s final frontier – to change the culture of India’s 1.252 billion population and offer a viable alternative to cricket. The ISL launched last October, in a blaze of razzmatazz, with the opening game in Kolkata drawing a crowd of 65,120 and, for the 10 weeks that followed, the organisers went all in. There was a match every night across Star’s prime-time TV platforms, with the home-and-away league format leading up to semi-finals and a final, which was won by Atlético de Kolkata.
http://www.theguardian.com/football/2015/may/19/john-abraham-bollywood-football-india-super-league 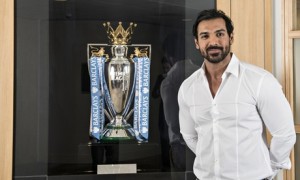 The Bollywood superstar John Abraham, a co-owner of NorthEast United, on a visit to Premier League headquarters in London. Photograph: Daniel Hambury/Stella Pictures

Mission trip to Haiti leaves lasting impact on Ole Miss football team
Russell still remembers one little girl he met on the trip. The players were directed not to give away their bottled water to the locals, but some did anyway. This specific girl would come over and hold Russell’s hand every time before the group was about to leave, knowing he would give in and give her a bottled water before they left. He still remembers her face. Those are the memories that stay with you even after you return home. “Once I finally got back into the States, I couldn’t stop thinking about it,” Russell said. “In our world, we have everything. There’s so much we take for granted.
http://espn.go.com/blog/sec/post/_/id/101962?ex_cid=espnFB 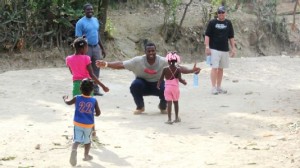 Blind pole vaulter Charlotte Brown wins state championships bronze
Teenager Charlotte Brown cleared 3.5m and was joined on the podium in Austin by her guide dog Vador. Brown developed cataracts at 16 weeks and had artificial lenses inserted, but her vision began to worsen aged 11 and she is now blind with only a “jigsaw puzzle” of light and dark shades. “This story really wasn’t about me,” said the 17-year-old. “It was about everybody that struggles with something.” The Emory Rains student has pursued a medal for the past two years, finishing eighth and then fourth before taking third as a high school senior on Saturday. Brown first took up pole vaulting, which is not a Paralympic sport, in seventh grade because she wanted something a little “dangerous and exciting”.
http://www.bbc.com/sport/0/athletics/32769608 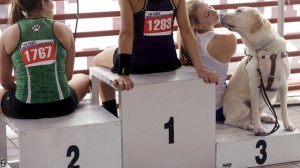 Five Charitable NBA Players Who Have Made The World A Better Place
With fame comes power and prestige, not to mention wealth. But that doesn’t necessarily translate into charity or goodwill toward all. However, there are NBA players with all the world’s comforts, who, like U.S. Marines, offer what they can with the same selfless service. Here are five NBA players who — through charity and time — represent the spirit of altruistic understanding on the foundation of “we over me.” Obviously, donating money and time isn’t the same as putting your own life on the line when people join the Marine Corps, but these NBA players have gone above and beyond the pale to try and enrich the lives of others and make the world a more decent place. This world could use more NBA players like these five.
http://uproxx.com/dimemag/2015/05/5-nba-players-selfless-like-marines/ 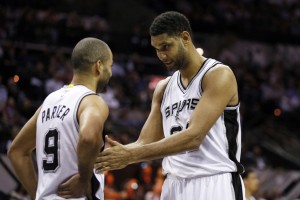 There’s Going To Be A Tackle Football League For Little Girls In Utah
Organizers in Utah are starting what they believe to be the country’s first girls-only tackle football league this month, and it already has a marquee player. Sam Gordon, whose viral 2012 highlight reel led to a Super Bowl invitation and her very own Wheaties box, had no problem in helping to create interest in the Utah Girls Tackle Football League. League president Crystal Sacco said that the team rosters for the fifth and sixth-grade girls were filled within five days of the announcement. “My friends were so excited to play football,” Gordon, 12, said in a release.
http://www.huffingtonpost.com/2015/05/22/girls-tackle-football-league_n_7276236.html?ncid=fcbklnkushpmg00000019 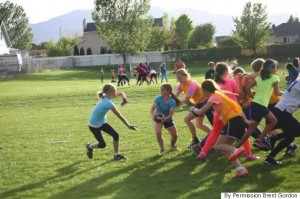 Sam Gordon hands off during a recent workout of the Utah Girls Tackle Football League.

Human rights, labour standards and anti-corruption measures must be central to Olympic Games bids
To ensure that the 2024 Olympics and all Olympic events that follow can be “celebrated not just for their sporting glory but for truly upholding the principles of Olympism” the SRA recommends the IOC includes in the bidding criteria, and in the Host City Contract for 2024, labour and human rights standards on: freedom of association; the right to collective bargaining; protection from discrimination in employment; elimination forced labour and child labour. The SRA suggests the IOC adopts “robust due diligence procedures to ensure that the Games do not cause or contribute to human rights abuses in the hosting or staging of an Olympic event”. Measures to ensure IOC complies with the highest standards of anti-corruption and business integrity are also essential.
http://www.amnesty.org.uk/press-releases/agenda-2020-human-rights-labour-standards-and-anti-corruption-measures-must-be 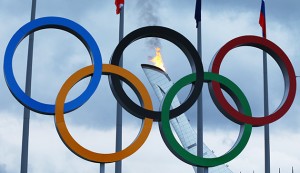 Meet the homeless women dreaming of playing football in the World Cup
When she was living in the hostel, Scannell was offered an opportunity to take part in the women’s Homeless FA – England’s national homeless football initiative, running in conjunction with the Football Association and youth homelessness charity Centrepoint. It involved a six-week programme at Arsenal football club (a number of premier league clubs take part, such as Fulham and Manchester City), where Scannell would receive a coaching qualification and be in with a chance to represent England in the ‘Homeless World Cup’. “I’d never played football before,” says Scannell, “but I thought it sounded good and it would help me.” It did – she made the England women’s team for the World Cup, along with 23 other players – and they went off to Poland to play against 64 other countries. They didn’t win, but it didn’t matter, because Scannell gained more than a trophy.
http://www.telegraph.co.uk/women/womens-life/11616367/Football-World-Cup-Meet-the-homeless-women-dreaming-of-football.html 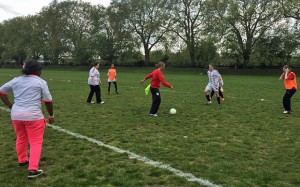 The girls’ training in action

95th time lucky for University of Tokyo baseball team
The University of Tokyo beat Hosei University 6-4 at Jingu Stadium in its first victory since Oct. 2, 2010.”We’re finally out of the tunnel,” manager Kazushi Hamada said. The school is Japan’s premier university, and produces many of the country’s top politicians, lawyers, and doctors. But unlike rivals in the Tokyo Big 6 Baseball League, the University of Tokyo does not offer sports scholarships or scout high school players. Since World War II, the team has never finished in the top half of the six-team league. Two seasons ago, the university team hired former Yomiuri Giants and Pittsburgh Pirates pitcher Masumi Kuwata in a bid to turn around its fortunes.
http://www.foxsports.com/mlb/story/japan-baseball-university-of-tokyo-94-game-losing-streak-ends-052315?cmpid=tsmfb%3Afscom%3Afoxsports 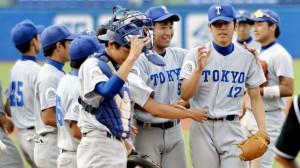 Pitcher Akihiro Shibata (12) of the University of Tokyo is congratulated by his teammates after putting an end to the team’s 94-game losing streak.

From athlete interviews to Top 10 lists, sports was a fixture on ‘Letterman’
Sports have always been a big part of David Letterman’s talk shows. From his days hosting “Late Night with David Letterman” on NBC to his current run as host of “Late Show with David Letterman” on CBS, the biggest names in sports have always appeared with the funnyman. Athletes weren’t relegated to just doing an interview, either. Dave played tennis with Serena, pitched to Josh Hamilton and threw footballs through taxis with Peyton Manning. As the 68-year-old from Indiana gets set to retire on Wednesday after 33 years in the business, The Buzzer is looking back at memorable sports figures who have appeared on his shows, sports-related Top 10 lists and other sports bits Letterman has given us.
http://www.foxsports.com/buzzer/story/david-letterman-sports-interviews-top-ten-lists-051915?adbsc=social_20150521_46188856&adbid=10153901632974552&adbpl=fb&adbpr=112638779551
(Video, https://youtu.be/hwqjWVvO4Rs)  Caption: 1992: Letterman took batting practice at Yankee Stadium, got tips from manager Buck Showalter and showed off his Sparky Anderson impersonation.