Eagles DE Chris Long donating his entire salary for educational equality
https://www.usatoday.com/story/sports/nfl/2017/10/18/eagles-defensive-end-chris-long-is-donating-his-salary/106760240/
A lot is made of how much money professional athletes make and how much they spend. When that spending is for good, it gets our attention. Chris Long doubled down on his initial donation of six of his NFL game checks to a middle school and high school by committing the remaining 10 game checks to educational equity organizations in three cities. The campaign, called “Pledge 10 for Tomorrow,” also encourages fans and businesses to donate to match Long’s contribution.

How one Patriots Super Bowl ring gave new life to 24 orphans in Thailand
http://www.espn.com/nfl/story/_/page/HotReadx170131/how-jerod-cherry-new-england-patriots-super-bowl-ring-gave-new-life-24-orphans-thailand
For many, being a “game changer” means being the best person on a team doing something great. We agree with that to a point. It doesn’t have to be great and you don’t have to be the best to do it. We all have the power to make a difference. Jerod Cherry, 3x Super Bowl champion with the New England Patriots, was not a starter on the team but he was a game changer on and off the field. Jerod’s donation of his first Super Bowl ring has changed the lives of 24 young people in Thailand and thousands more who (now) know of what he did.

The U.S. Women’s Hockey Team Had Boycotted For Fair Pay. Now They’re World Champs
http://www.huffingtonpost.com/entry/us-womens-hockey-2017-world-champs_us_58e84c53e4b00de14103b451
“You have to fight for your right…” Instead of partying, the U.S. women’s hockey team was fighting for fair play and fair pay. Much like their sisters from the U.S. soccer team, the hockey players threatened to give up what they love most, the chance to play their sport, in order to get the powers-that-be to recognize their hard work and passion and to support that financially. They ended up winning that battle and the world championship as well.

After A Traumatic Injury, One Athlete Refused To Quit And Powered On To Help Others
https://sports.good.is/articles/high-five-foundation
Overcoming challenges. That is a regular theme found in Sports Doing Good newsletters. It is a theme that resonates with most people, seeing someone confront a difficult situation or circumstances and continue to fight despite the odds. In this story, Ron Tuscany not only fought his own battle, but he created a foundation, the High Fives Foundation, to educate others and help them in their own recovery.

Women’s Lacrosse Players Lost Their College, Not Their Team
https://www.nytimes.com/2017/02/23/sports/new-york-institute-of-technology-lacrosse.html
The value of being in college is more than just what happens in the classroom. For student-athletes much of the “life learning” takes place on the field, in the lockerrom, and in other team settings. Well, what do you when that is all taken away? To lose such a powerful network of teammates and friends is not easy. The young ladies of the former Dowling College lacrosse team were fortunate enough to find a home for their education and their team, a turn of events that could have lifelong benefits.

1st woman to officially run Boston Marathon does it again, 50 years later
http://www.cnn.com/2017/04/17/us/boston-marathon-kathrine-switzer-trnd/
Many times in sport we recognize a historical or pioneering feat with a ceremony, maybe with a presentation of a replica uniform or a plaque. Kathrine Switzer, the first woman to complete the Boston Marathon, decide that recognition of her ground-breaking run would come in the form of a repeat of that run. Wearing her legendary 261 big number, she ran a race not with only one woman, but thousands, those women representing the millions of women around the world who have embraced running in man of the same ways their male counterparts had.

Hyemin Kim donates Symetra Tour winnings to charity
http://www.espn.com/espnw/sports/article/19973479/hyemin-kim-donates-symetra-tour-winnings-charity
Giving money to a person or cause in need is pretty much recognized globally as a good thing to do. No matter how much, giving is good. However, it resonates more with us when you don’t necessarily have much to give and you do it anyway. And you do it because you see a chance to help others access opportunities in life that enabled you to get where you are today. Budding professional golfer Hyemin Kim did exactly that and blew us away with her empathy and her donation.

Barcelona’s incredible comeback over PSG was part of a match won in the mind
http://www.independent.co.uk/sport/football/european/barcelona-6-psg-1-champions-league-psychological-battle-luis-enrique-a7621441.html
Even for one of the world’s best teams, housing some of he world’s best players, coming back from a 4-0 deficit to win on aggregate was going to take a miracle against a quality side like PSG. But for many, it was not simply the enormous skill of the Barcelona that would enable this type of comeback. The team, players, coaches, and even fans, had to believe it, even before the game started. Despite a goal scored by PSG, Barcelona proceeded to get the goals it needed to in 95 minutes of play to complete what many felt was the greatest comeback ever.

African-American Museum Wins New Fans: Athletes
https://www.nytimes.com/2017/05/24/sports/national-museum-african-american-history-culture-nba-athletes.html
Perspective can directly impact one’s appreciation of a person, place or thing. The new African-American Museum in Washington, D.C. has already begun to help those and young old better understand what has happened in the past and how that impacts us today and potentially moving forward. The African-American experience in the U.S. is relevant to everyone, irrespective of one’s occupation. But as a professional athlete, that appreciation for everything represented at the museum takes on special meaning because of the way sport has helped shape the individual and collective experience in this country. Current athletes see themselves and are inspired by those who have become before them and see the museum not as a home for memories but also a launching pad for change.

Story of the Year

Athlete gets cancer. Athlete fights cancer. Repeat, again and again…
https://www.si.com/more-sports/2017/07/10/gabriele-grunewald-cancer-fight-runner
When it comes to dealing with cancer of any type, there is the idea of a fight, often a long fight. But in the fight, if someone is able to come through it okay, there is the hope that there is no more, that the one big battle was the last battle. Gabe Grunewald has had more than her fair share of cancer battles. This lifelong runner has kept that part of her life featured prominently in her day-to-day activities. It connects her to her past, her college teammates, her husband, and a larger community of runners who have also battled cancer. Gabriele’s story sounds incredibly unfair…and it is. But her story is not over and 2018 can only bring a promise of hope. 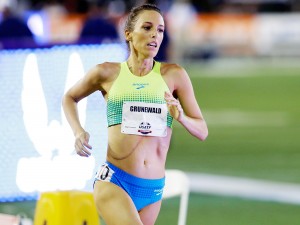