Bay Area stays active; this time it's the Raiders

Richmond youths will soon have new artificial turf to play on at Martin Luther King Jr. Park, with help from the Oakland Raiders.

Raiders legend Jim Otto and the Raiderettes on Tuesday gave $200,000 to the city and Richmond Children’s Foundation to install synthetic turf in a new sports field.

“Our children deserve a field of this caliber,” said Mark Torres, president of the Richmond Eagles Football team.

Crews will start preparing the site next month, with the new turf scheduled to go in early next year. The park is in the Nystrom area, which is targeted for revitalization. Once built, the field will accommodate nearly 50,000 player visits, a sizable increase from the roughly 1,000 visits the field handles now, officials said.

“The new park and field will serve hundreds of children and families in the neighborhood,” said Joan Davis, CEO of the Richmond Children’s Foundation.

The Raiders provided the funds from the NFL Youth Football Fund Grassroots Program in partnership with Bay Area LISC. The groups have built or renovated 170 football fields nationwide in the past decade with support from the NFL Foundation. 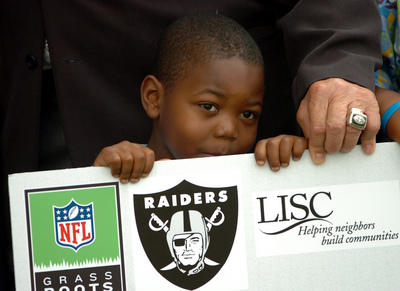