My fellow Hoyas Alonzo Mourning and Dikembe Mutombo are again in the news for their admirable off-the-court activities. As they both enter retirement full-time, we are likely to see such activities and positive coverage continue.

The latest recognition will carry Mourning to the Basketball Hall of Fame. Mourning was named Tuesday a co-recipient of The Mannie Jackson-Basketball’s Human Spirit Award.

The award is presented to those who have used their role in the sport to spark personal growth and community change. The NBA and Naismith Hall of Fame announced Tuesday that Mourning will share the award with Coca-Cola Company executive Ken Hudson and former Detroit Pistons legend Bob Lanier.

Mourning, a seven-time NBA All-Star and two-time Defensive Player of the Year, retired in January after 15 seasons. He helped the Heat win an NBA title in 2006 and becomes eligible for the Hall of Fame in four years.  (The article continues at http://www.miamiherald.com/sports/story/1181266.html)

Dikembe Mutombo on Monday guided U.S. Secretary of State Hillary Clinton through a hospital he founded in his native Congo. The full article can be found at http://sportsillustrated.cnn.com/2009/basketball/nba/08/10/clinton.mutombo.ap/index.html?eref=si_nba, with an excerpt provided below.

Mutombo, who played 18 seasons in the NBA, smiled playfully at infants in a maternity ward and explained why he donated $19 million of his own money to fund the Kinshasa facility named for his late mother.

“This hospital was such a dream and today it is becoming a reality and so important to so many people,” the 42-year-old Congo native said. “We think that Congolese people deserve better health care and we hope that what we are doing here is setting an example so that people can have hope.”  (The article continues at http://sportsillustrated.cnn.com/2009/basketball/nba/08/10/clinton.mutombo.ap/index.html?eref=si_nba) 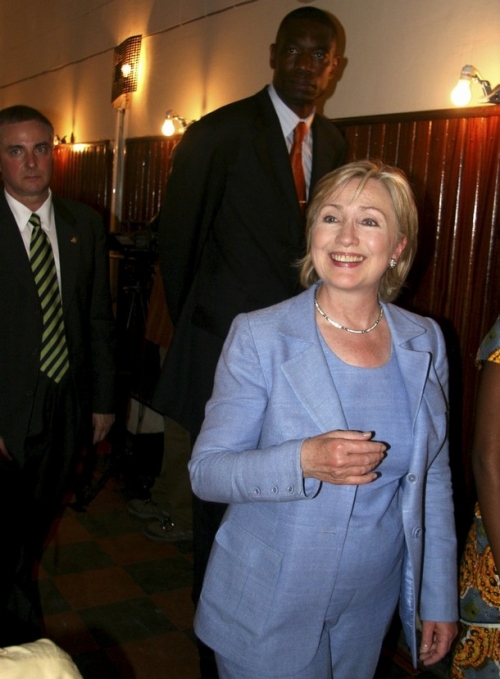