A Chance to Play, A Right to Dream

It may be hard to imagine what I, a 39-year old who grew up on Long Island and lives in NYC has in common with a 9-year old who lives in Ghana. After reading a few paragraphs of Wright Thompson’s great piece at ESPN.com, it was clear to me. We’re both soccer players. And the game, like many other games, is a common language for people around the world. Don’t know the same language or understand a different culture? Hold up a soccer ball, basketball, or cricket bat and it is likely that you have just taken the first step in making a friend and joining a community.

The full piece by Wright can be found at http://sports.espn.go.com/espn/eticket/story?page=ghanasoccer with excerpts provided below.

Hungry for a Better Life

By Wright Thompson, ESPN’s Outside the Lines

HUNGRY FOR A BETTER LIFE

AMALE, Ghana — On the most important day of his life, Shadrak Kwabena wakes up hungry. He is 9 years old, his pencil legs covered in knee-high, hand-me-down yellow socks. This is the moment his mother imagined when she took him to the coach three years ago with a request: Please give my son a future.

He makes his way toward the mosque for morning prayer, the dirt streets pocked with rock and rubble. Around town, other boys slip into the predawn darkness. The ones who own soccer cleats wear them; parents save for months to afford the $12 shoes. Many come barefoot. Word has spread: A scout is in Tamale, with strange words and customs, who possesses the mystical power to change a person’s destiny forever.

The coach, Sharhabib Mumuni, is at the mosque waiting on Shadrak and the rest of the Great Eagles. Mumuni has procured the best breakfast he can. Last year, the boys started game days with hearty porridge. Today, it’s bread and tea.

Once they’ve prayed and eaten, the boys walk toward the field, which is ringed in barbed wire and, thanks to last night’s monsoon, covered in large patches of standing water. Andy Farrant, a 23-year-old from England, surveys the damage. He hardly looks mystic. More like a first-year law student, with a lean build, a friendly, boyish face and a mother who worries about him in Africa, so far away from home. This is his show — he’s head scout, a volunteer, for the Right to Dream Academy. He will decide which boys come to the capital city of Accra and which stay behind. Playing God makes him uncomfortable. He’s not blind. He sees the desperation. This is one of the poorest places in the world. He sees that the 20 coaches the academy invited have shown up with more than the allotted 10 players each — one coach, who was not invited, has brought his team anyway. “Those boys who come from the North,” Farrant says, “you’re their chance in life.”

more about “ESPN – Hungry for a Better Life – E-t…“, posted with vodpod

Looking around, he does some counting in his head, realizes there are far too many players here for the camp to run smoothly. It’s only 7 a.m., and he’s about to snuff the first of many dreams today.

“I told the coaches to only select 10 players,” he tells a local helper.

“If they bring just 10 players,” the man explains, “the rest will not get a chance to play.”

“I told them only to register 10 players,” Farrant says, sounding aggravated, “so they only should have brought 10. Can you arrange the coaches for me?”

The West African sun has begun its all-day assault. Farrant stands before the men and reiterates the rule about the number of players. The coaches look at their teams.

How will they choose? 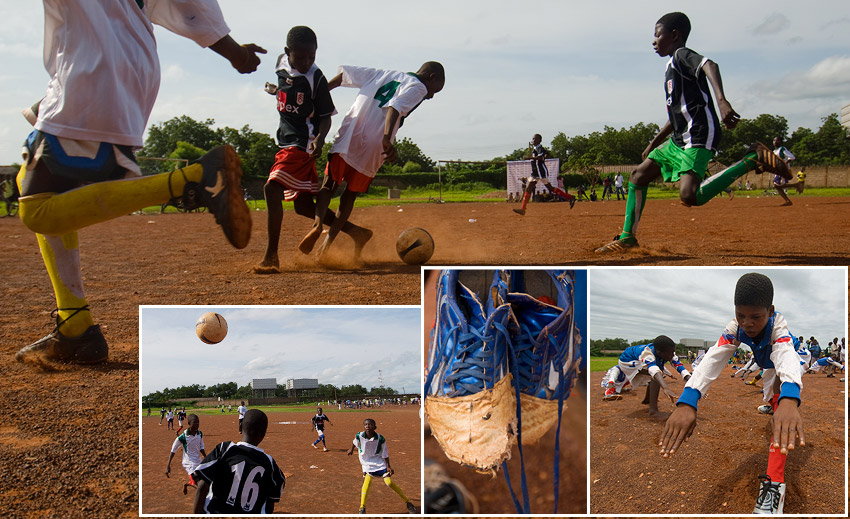 (Photo: Candace Feit) Dreams live and die in a few scant hours during soccer tryouts for the Right to Dream Academy.

Four years earlier, another young boy walked the early morning streets from his mud-walled home to the Right to Dream tryout — Abdul Gafaru Umar, Oscar to his friends. A journey began that day — the same one Shadrak hopes to begin.

Oscar grew up with about 25 other family members in a small compound, consisting mostly of outdoor space for their animals, the entire thing about the size of a tennis court. The local mosque stood tall overhead. The coffin maker lived down the alley. His father was born in the family compound. So was Oscar. His kids would almost certainly be born here, too.

(The story continues at http://sports.espn.go.com/espn/eticket/story?page=ghanasoccer)