This will be a reoccurring theme. The beauty of sports is the constant stream of good performances, with the occassional great ones. All should make us feel good, even if it is for just an instant.

We are constantly bombarded by news of bad acts, bad people, etc. When we get good news, we embrace it but if it happens to continue, slowly write it off as expected or no big deal. Sports, when played at a high level, should not fall victim to that phenomenon. To perform at an elite level on a consistent basis takes incredible physical and mental strength. Two of the best, maybe ever, are in our midst. Whether they have a true friendship or not is almost irrelevant. The fact that with two of them we get to see greatness magnified is what is important.

Please see an excellent piece by Greg Garber from ESPN.com at http://sports.espn.go.com/sports/tennis/columns/story?columnist=garber_greg&id=4473395. An excerpt is provided below.

The familiar voice of Tiger Woods winds along smoothly underneath flashing images of a champion’s evolution. But this slick 2007 Nike commercial is not about the world’s greatest golfer.

Then Woods, looking up from a putt, says, “But my name is Tiger Woods. I have 12 majors and counting. So keep up, buddy.”

As it turned out, Federer also reached the finals of the season’s last three Grand Slam events and won two of them, the French Open and Wimbledon. He was within two points of beating 20-year-old Argentine Juan Martin del Potro at the U.S. Open, but surprisingly fell in five sets.

Asked earlier this year at Wimbledon what he had in common with Woods, Federer said, “Success, I guess. Our mindset, our approach. We’re driven. We try to dominate.” 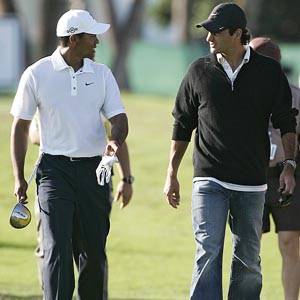 They don’t just try. They do it. Of all the world’s great athletes, they might be the only ones who can call each other a true peer.

Federer took the career Slams record from Pete Sampras, whom he passed at Wimbledon this year and leads by that identical 15-14 mark. Woods needs to win five more majors to surpass Jack Nicklaus’ total of 18.

On Sept. 13, Woods won the BMW Championship at Cog Hill Golf & Country Club by 8 strokes to take the lead in the FedEx Cup standings with one event to play. Afterward, he was asked about Federer.

“Is he playing right now?” Woods asked, fully aware that Federer, like himself, does his most important work on Sundays.

Indeed, Federer was in the process of defeating Novak Djokovic in the semifinals.

Although their relationship is seen by some cynics as convenient, enabled by the Nike apparel behemoth and overstated, they are in fact friends. A major sporting publication recently questioned the depth of their relationship, but people who know them say the connection is genuine.

(The article continues at http://sports.espn.go.com/sports/tennis/columns/story?columnist=garber_greg&id=4473395)