Addressing a problem at the point of impact

We highlighted a story a few days about the NFL study that looks at the possible relationship between playing careers in the league and memory-loss and brain related diseases later in life. Here, we cite a great story about an individual and company (Vin Ferrara and Xenith) leveraging their love of football and their entrepreneurial spirit to build a business with short and long-term benefits for its customers.

You can read the full article by Jenny Vrentas from the Newark Star Ledger at http://www.nj.com/giants/index.ssf/2009/09/delbarton_school_graduate_has.html, with an excerpt provided below. 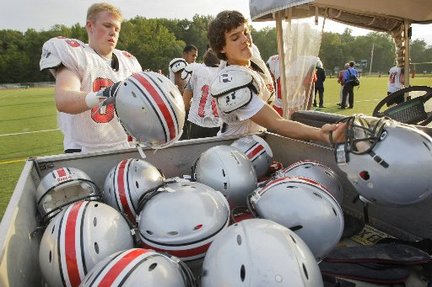 Vin Ferrara was at home in January 2004 watching an NHL game when former Rangers center Eric Lindros, skating along the boards, was knocked to the ice after a hard hit from a Washington Capitals player. Lindros sustained the eighth diagnosed concussion of his career.

“I was bothered by it,” said Ferrara, a 1991 graduate of Morristown’s Delbarton School, “and hooked on it from then on, that there had to be a better way.”

Ferrara, who has medical and business degrees from Columbia University, had the right credentials to figure out that way. A former quarterback at Harvard and Delbarton, Ferrara started with the sport he knew best and targeted one of the scariest injuries in sports.

He founded his own company, Xenith, with the intention of developing a football helmet that attempts to reduce the risk of traumatic brain injuries prevalent in athletics. Between 1.6 and 3.8 million concussions are suffered each year through sports and recreation, according to estimates from the Centers for Disease Control and Prevention.

An inspiration Ferrara had while squeezing a saline solution bottle, along with more than $12 million in financing and input from a Canadian human kinetics professor and national brain injury experts, yielded the Xenith X1 football helmet.

The new technology replaces traditional helmet padding with shock absorbers that vent air based on the force of impact — much like a saline solution bottle does when squeezed — and redefines how equipment can lessen the force of a blow.

After test-driving the helmet at hundreds of high schools and colleges, including Delbarton and Princeton, Xenith began its first public sale season last November. About 400 youth teams, 600 high schools and 200 colleges have players wearing the X1 this fall, and four NFL teams have also placed orders.

“The data is very promising, from what I understand, to decrease the force to the brain,” said Christopher Nowinski, president of the Sports Legacy Institute, which studies the effects of sports-related brain injuries. “Helmets will probably never be able to prevent concussions. But better helmets are a piece to the puzzle.”

Helmets, of course, have come a long way from the soft leather caps worn at the game’s inception. The principles of physics have since been maximized to develop better means of protecting players’ heads.

Tony Kurdzuk/The Star-LedgerDelbarton School grad Vin Ferrara, co-inventor of the new Xenith helmet, talks to the Hun School football team about them before 12 of the helmets are donated to the team.

The development of the hard plastic helmet in 1939 was a critical step forward. If the material is rigid enough, the force of the collision will be distributed over the entire surface area of the helmet rather than concentrated at the point of contact — which can reduce the force of the blow sustained by the player by about 10 times.

Another way to protect the head is by increasing the time of the collision, the principle around which the X1 helmets have been designed. During a hit, the player’s head undergoes a change in momentum, or an impulse, equal to the force of impact multiplied by the duration of the collision. While the magnitude of the impulse cannot be changed, the force the head feels can be decreased by increasing the time of collision.

(The article continues at http://www.nj.com/giants/index.ssf/2009/09/delbarton_school_graduate_has.html)