From The Onion – Raiders rule!

Don’t forget about Onion Sports! It is okay to laugh. 🙂

EAST RUTHERFORD, NJ—In an improbable display of competence and a basic execution of football fundamentals, the Oakland Raiders stunned the football world Sunday when running back Michael Bush miraculously rushed for three yards against the Giants and succeeded in converting a first down.

The Raiders, who fearlessly faced a third-and-one situation on their own 22-yard-line, somehow gained the 36 inches needed for an elusive first down, despite numerous obstacles that included a professional NFL defense, owner Al Davis’ incompetent personnel decisions, mediocre play-calling, and general ineptitude.

“I cannot believe what I just saw,” said CBS commentator Greg Gumbel, adding that he was amazed the Raiders advanced the ball beyond the line of scrimmage, let alone gained a full 10 yards. “The fact that they were out on the field for three consecutive plays without turning the ball over is incredible. But a first down? An actual first down from the Oakland Raiders? You…I mean—I just, I can’t…” 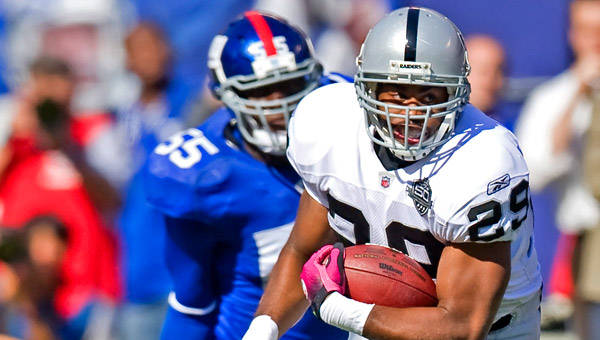 According to eyewitnesses, Raiders fans were equally astonished, reportedly shaking their heads in disbelief at the team’s lack of incomplete passes, false starts, and holding penalties during the four-down series. Chuck Walker, a lifelong Raiders fan, said he was “proud” of his hometown team for defying the odds and avoiding mental errors for nearly 120 seconds.

“I’ve never seen them go that long without totally screwing up,” said Walker, who believed the first down may have even slightly changed the game’s momentum. “I was certain that with a yard to go they would send five receivers deep and [quarterback] JaMarcus [Russell] would chuck the ball to one of the Giants’ defensive backs.”

(The hilarity continues at http://www.theonion.com/content/news/raiders_achieve_first_down)