Jason King from Yahoo! Sports has a very nice story on one of college basketball’s top players, Patrick Patterson, from the Univ. of Kentucky (see, I can do non-Georgetown stories!). These student-athletes really do have a lot of demands on their time and it is great to hear about one who represents the many who are increasingly finding time to be a role model and friend.

The full story can be found at http://rivals.yahoo.com/ncaa/basketball/news?slug=jn-patterson101609&prov=yhoo&type=lgns, with an excerpt below.

LEXINGTON, Ky. – The lights inside Rupp Arena had been off for 20 minutes, but Patrick Patterson wasn’t ready to leave.

As Patterson reached over the rail to sign the girl’s program, a security guard grabbed him by the arm and directed him toward the tunnel. Rupp Arena was officially closed, the man announced. It was time for everyone to leave.

Two years later, Patterson still remembers how he felt as the girl dropped her pen, wrapped her arms around her father’s leg and began to sob.

“It was terrible,” he said. “I didn’t have any choice but to walk back over there and sign her program and take a picture with her. I couldn’t make a little girl cry. She looked up at me said, ‘Thank you Mr. Patterson.’”

The 6-foot-9, 235-pound Patterson paused and softened his voice.

“It really is amazing,” he said, “how much power you have as an athlete, how much influence they can have on a little kid. It feels good to be able to make them smile.” 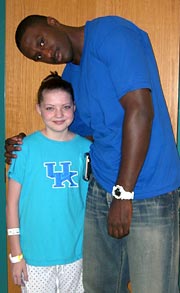 Perhaps that explains why Patterson, a probable first-round pick in next summer’s NBA draft, ended up in the living room of a total stranger last week. After serving as an instructor during a Kentucky’s basketball camp for women, Patterson encountered a mother in the parking lot who needed a ride home because her husband had experienced car trouble.

As if offering to give her a lift wasn’t enough, Patterson followed her into her home and spent 10 minutes talking with her husband – an avid Wildcats fan – and their two young sons.

Patterson approves almost everyone who requests access to his Facebook page. As of Wednesday he had 4,992 friends. One of them is Heather Durham, a 14-year-old Kentucky fan with cystic fibrosis.

Heather, who is on the waiting list for a double-lung transplant, had never met Patterson when she sent him an instant message a few months ago, so she wasn’t expecting him to respond. Patterson, though, spent the following two months offering encouragement to Heather during online chat sessions.

Patterson took things a step further a few weeks ago when he showed up at the University of Kentucky Children’s Hospital for a surprise visit with his new friend. Heather said the two of them talked for nearly two hours.

“He was so cool,” Heather said during a phone interview Monday. “He told me he’d be praying for me.”

Other than the nurses taking pictures of him with their cell phones, Patterson didn’t encounter any cameras or microphones or reporters as he left the hospital that day, mainly because no one knew he was there. Oftentimes visits by sports stars are organized by the athletic department and publicized with a press release.

(The article continues at http://rivals.yahoo.com/ncaa/basketball/news?slug=jn-patterson101609&prov=yhoo&type=lgns)