Another benefit of having more players in U.S. pro leagues with an international background, whether they grew up in the U.S. or not, is the inevitable sharing of culture and information. These players help expand the perspective of coaches, teammates, and fans. And that perspective can include serious issues as well, such as global health.

Madieu Williams of the NFL’s Minnesota Vikings, only 28 years old, is such a player. His $2 million gift to the Univ. of Maryland is a wonderful testament to values instilled in him by his family and communities, both in Sierra Leone and in Prince George’s County, Maryland.

You can read the full article from the Washington Post at http://www.washingtonpost.com/wp-dyn/content/article/2009/11/04/AR2009110404686.html, with an excerpt below.  And to learn more about Madieu’s foundation, please visit http://www.madieuwilliams.org/mwfoundation/index.html.

Honoring his mother, and alma mater; Immigrant uses NFL success to give $2 million to U-Md. for health initiatives center

At 9, Madieu Williams immigrated to Prince George’s County from Sierra Leone, one of the poorest nations on Earth. The move gave his family a sense of perspective. His mother told him over and over that if he ever found himself in a position to make a difference, he should do it. 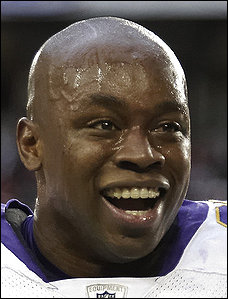 At 28, Williams finds himself in a relatively prosperous position: He plays free safety for the Minnesota Vikings. And Wednesday, he made a difference.

In a morning news conference, the University of Maryland announced the creation of the Madieu Williams Center for Global Health Initiatives. The former U-Md. star is providing a $2 million endowment. It is the largest gift to the flagship school from an African American alumnus and the largest sum donated by someone so young.

Williams doesn’t remember the poverty in Sierra Leone, where, according to World Bank statistics, 27 of every 100 children die by age 5.

But he remembers the standard for compassion set by his mother, a nurse, who raised him as a single parent. And he remembers his experience working with sick, sometimes terminally ill, children as a college intern in the recreation therapy section of the National Institutes of Health in Bethesda.

“I think she was raising my social consciousness,” he said.