Thanks to Steffi Decker from Duke Univ. who passed along this article. You will be seeing Steffi’s contributions more often in the next few weeks.

FSU standout football player, Myron Rolle, who earned a Rhodes scholarship earlier this year is taking the year to study at Oxford before going back to play in the NFL.  It’s a refreshingly rare story about a talented student-athlete who has managed to maintain a healthy perspective about the value of sports compared to a broader conversation about his ultimate contribution to society that has nothing to do with rushing yards and touchdowns.  You can see the full article about Myron at http://www.nytimes.com/2009/10/25/sports/ncaafootball/25rolle.html, with an excerpt below.There is also a very interesting Q&A with Myron that you can see at http://thequad.blogs.nytimes.com/2009/10/24/the-quad-qa-myron-rolle/

The Times also offers an article of one my favorite student-athletes ever, Byron “Whizzer” White. Mr. White, another true scholar-athlete, was recognized with inclusion in some very exclusive groups – Rhodes Scholars and Supreme Court justices – but lived a life of tremendous of public service. Definitely worth a read. http://thequad.blogs.nytimes.com/2009/10/27/before-myron-rolle-there-was-byron-white/.

On the Way to the N.F.L. Draft, a Year of Fulfillment in England 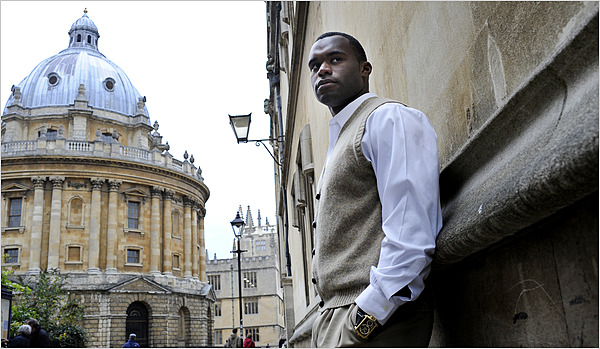 OXFORD, England — Instead of chasing after wide receivers in the N.F.L., Myron Rolle came here to chase ghosts around the ancient campus of the University of Oxford.

Rolle, 22, established himself as an elite student and athlete at Florida State, becoming a Rhodes scholar and a top N.F.L. prospect. But he temporarily said no to millions of dollars and risked his N.F.L. draft standing to study here. He is perhaps the most prominent athlete to accept a Rhodes scholarship since Bill Bradley in 1965.

“I feel a little disappointed when I see guys playing on Sundays, especially guys I’m friends with,” said Rolle, a 6-foot-2, 215-pound safety. “But when I walk out of my accommodations in Norham Gardens and spend time with my friends and go to class, I realize that I did make a good choice. It’s been worth it.”

Rolle walks the same streets that the future president Bill Clinton did when he was a Rhodes scholar. Rolle trains on the same grounds where Roger Bannister, an Oxford graduate, ran the first sub-four-minute mile in 1954. And as Rolle prepares for a life as a doctor and philanthropist after football, he aims to take a similar path as his role model, Bradley, the former N.B.A. player and United States senator.

Rolle plans to carve his own legacy after Oxford by attending medical school and becoming a neurosurgeon. He has started a foundation that is building a medical clinic and recreation center on a remote island in the Bahamas.

Although he misses football, Rolle has forged friendships that cross cultures and continents. He takes stimulating classes in which discussions and engaging classmates matter more than papers and tests.

“I think it’s a great message for all of us,” N.F.L. Commissioner Roger Goodell said of Rolle’s decision to attend Oxford. “Even the greatest players don’t play forever. And they’re going to have to think about other careers, and he’s obviously thought about that at a young age.”

Football remains a part of Rolle’s future. He rises at 6:30 a.m. every day for two-hour workouts to prepare for this spring’s N.F.L. draft. Bradley, by contrast, ate five meals a day, did not exercise and gained 30 pounds in the two years he studied abroad, he said in a recent phone interview. Bradley jokingly encouraged Rolle not to follow his lead.

Bradley said he was proud that Rolle had set the groundwork for a life after sports. Rolle and his foundation have made strides toward raising the $5 million it will cost to open the clinic in the Bahamas. Rolle’s decision to study for a master’s degree in medical anthropology here will help him build an education foundation for his medicinal and philanthropic career.