Travis Pastrana, one of the great action sports athletes in the world, recently added his name to those supporting Race4Change, an effort that hopes to raise awareness and funds for microcredit/microfinance initiatives.

There are so many ways that we can support causes in our community and around the world. In Race4Change, you can partner up with individuals who will do the hard part – driving in the the East Africa Safari Classic – while we can do the easy part – donate and be a co-driver.

Below is a description of Race4Change and the press release announcing Travis’ support.

From http://www.race4change.org – Race4Change is racing to save the lives of those children. 100% of money raised will benefit Kenya-based Jamii Bora Trust, an innovative, world-renowned microfinance institution, and the Microcredit Summit Campaign, a global campaign to reach the world’s poorest, especially women, with credit and financial services.

On Nov 22 to Dec 1, 2009, Steven Funk and Jean-Louis Juchault will co-drive a 1975 Peugeot 504 coupe V6 rally car in the dangerous East Africa Safari Classic road rally throughout Kenya’s roughest terrain! Join with us and Donate to support The Microcredit Summit Campaign and Jamii Bora in their work.

NEW YORK, Nov. 09 /CSRwire/ – Nine-time X Games Gold Medalist and Rally legend, Travis Pastrana, is ready to rev up the movement to race to end poverty on this planet. Pastrana, who is already a Rally Racing Champ in America, has entered his endorsement of car #20, Race4Change (www.race4change.org), in the East African Safari Classic – one of the toughest rallies in the world. He joins the efforts of Race4Change in raising awareness, on an international level, about microcredit and is encouraging people to donate money to two of the worlds leading poverty fighting organizations, the Microcredit Summit Campaign (www.microcreditsummit.org) and the on-the-ground Kenyan microfinance legend, Jamii Bora, lead by microfinance eco-pioneer Ingrid Munro.

Microfinance is one of the most powerful tools being used to fight poverty. It is finding greater support as a viable, ethical, and socially responsible business model serving the very poor. Since the birth of the movement in the 1970s many poor families have moved across the poverty line proving microfinance to be one of the greatest innovations for social good ever conceived!

Microcredit, also known as microfinance, continues to surge as a massive movement to increase human dignity by providing a tangible means for more than 100 million of the world’s poorest families to empower themselves economically. With access to financial services they couldn’t get anywhere else, the poorest of the poor have proven themselves to be some of the most creditworthy entrepreneurs in life. 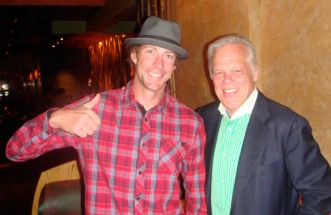 “We couldn’t be more pumped up to have Pastrana join us in our efforts to promote Microcredit,” said Steven Funk, an American-born Canadian, founder of Race4Change, Co-Founder of the Dignity Fund, and Chair of the Advisory Board to the Microcredit Summit Campaign. “Our mission is to drive a movement amongst road, rally, sports enthusiasts, and socially responsible people and organizations so that masses of people can unite, individually, to make change happen. We are racing towards a revolution that will unleash economic and creative innovation in the lives of millions powered by the engine of microfinance. It is a vital poverty fighting tool that improves healthcare, education, and the environment and moves the world from conflict and need to a more secure place of peace and prosperity. The prosperity brought by just a $45 loan is profound. Micro-entrepreneurs are empowered socially, economically and filled with dignity, one of the most powerful and rewarding human emotions. Better still, they repay their loans with interest, which allows microfinance to re-lend and be the gift that keeps on giving.” As President Barack Obama has so aptly said, “change comes from the bottom up.” Funk is a co-driver of car #20 in the race.

Pastrana is a living legend when it comes to performance motor sports and we’ve all seen his fearlessness on his MTV show, Nitro Circus. He lives life to the fullest, planning to set a new world record for a car jump on New Year’s Eve and says, “having been fortunate enough to travel to far off places, I’ve seen poverty firsthand and am glad to be able to lend a hand in the crusade to end it. What I do is sometimes considered dangerous, but let me tell you that there is nothing more dangerous to an individual, a country, or our world than poverty.”

(The press release continues at http://www.race4change.org/index.php?option=com_content&view=article&id=109:travis-pastrana&catid=41:press&Itemid=98)