Wheelchair rugby – not for the meek

This story highlights the power of sport, whether it is seen as a means to an end or just the end in and of itself. In the case of Talbot Kennedy and his participation on his wheelchair rugby team, it is both.

You can see the full article and watch a video at http://www.cnn.com/2009/HEALTH/11/16/wheelchair.rugby/index.html, with an excerpt below.

Playing rugby has helped Kennedy come to terms with his injury and his new life using a wheelchair.

“I’ve always been active in sports, and being on a sports team, it’s almost like you’re part of a family,” he says. “It’s your second family.” 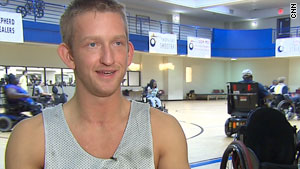 The Smash Rugby team at the Shepherd Center, a rehabilitation hospital in Atlanta, Georgia, scrimmages several nights a week on an indoor basketball court.

The team is part of the United States Quad Rugby Association, playing in tournaments across the country from November through April.

“They learn to live again, and learn to live in a different way but realize that there’s life after their injury, they can do all the things they did before.”
–Amy Bohn

“I got hurt jumping on a trampoline,” says Kennedy, now 24. “We were in the cheerleading gym … and I was all ready to go celebrate graduating from high school … and I remembered I’d seen my friend try this trick.”

But Kennedy landed on his head, damaging the vertebra in his upper neck. He was paralyzed from the chest down.

Entering college on the cheerleading scholarship he’d won was no longer an option.

“When I first got hurt I was worried about would I ever be able to live by myself or do other things that I wanted to do,” says Kennedy.

(The article continues at http://www.cnn.com/2009/HEALTH/11/16/wheelchair.rugby/index.html)