A new acronym for sports – CPR

This situation involving a referee performing CPR on a player invites the question of how many sporting events have CPR-trained referees of off-field officials. Certainly worth further review as the sports world spends more time discussing amateur and pro athlete health issues, e.g. concussions.

We’ve seen scary moments happen during NHL games, such as Chris Pronger(notes) taking a puck to the chest and suffering brief cardiac arrest during the 1998 playoffs and Jiri Fischer(notes) collapsing on the Detroit Red Wings‘ bench in 2005.

The most notable of frightening moments in recent times coming from Europe were the scrutinized death of Alexei Cherepanov, followed by Martin Kariya(notes) suffering a concussion and being taken off the ice on a tarp. 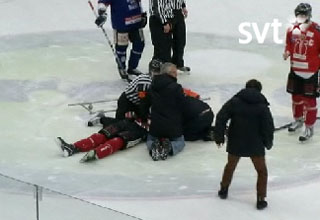 Luckily for Niklas Lihagen of Orebro HK of the Swedish Allsvenskan, tragedy was averted over the weekend when he collapsed on the ice after getting hit in the first period of a game against Bofors. Lihagen went into cardiac arrest. One of the referees, Wolmer Edqvist, who works as an ambulance driver, began CPR to attempt to restart his heart.

Fortunately, Edqvist’s attempt succeeded and Lihagen was taken away in an ambulance.