The BCS will be replaced

Much like in other scenarios in sports, e.g. advertising on uniforms, allowing liquor advertising, gambling on sports, the wild-card in baseball playoffs, those in favor of the status quo find religion, i.e. money, and decide to evolve. We will see this happen with the BCS as well.

I bring up the BCS here because for sports to do good, it needs to be good, it needs to have some semblance of integrity, honesty of debate, respect for the status quo but not blind allegiance to it. The BCS represents a game for the few, run by those with too much to lose – big conference schools, bowl games that no one cares about – and not enough to lose – college presidents who don’t have the courage to challenge their athletic directors and more likely, their big money donors. And it insults two major stakeholders – players and fans.

I have a lot of thoughts on the BCS and was going to put together a whole piece about its folly, the folly of hiring Ari Fleischer to handle PR, Ohio State president E. Gordon Gee”s unsubstantiated claim, etc., but I will defer to Dan Wetzel from Yahoo!, who has a great piece on the BCS. You can find “Wetzel’s playoff plan: Money talks,” here.  Please read it!! 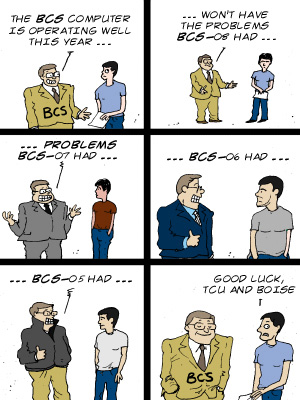