Congratulations to one Dikembe Mutombo, for being honored as the latest recipient of the John Thompson Legacy of a Dream Award.  Dikembe will receive the award today in honor of his work to better the lives of others during the annual “Let Freedom Ring” Concert to be held at The John F. Kennedy Center for the Performing Arts at 6 p.m. 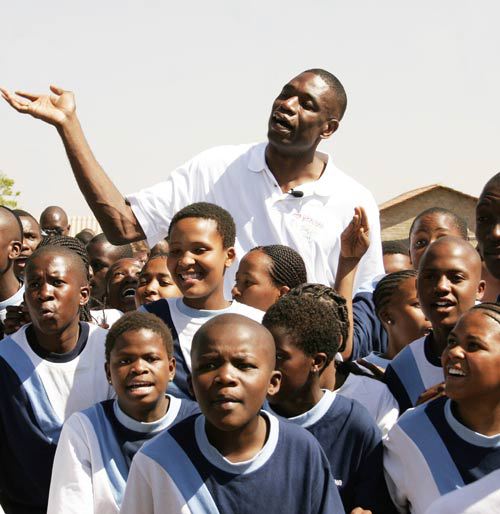 According to the press release, “The first “Legacy of a Dream Award” was presented in 2003 to John Thompson, Coach Emeritus of Georgetown men’s basketball team, in honor of his service to the community and dedication to the values of Dr. Martin Luther King, Jr. Past awardees include Colin and Alma Powell (2004), William H. Gray III of the United Negro College Fund (2005), Rosa Parks, who received the award posthumously (2006), the Organization of African First Ladies Against HIV/AIDS (2007) and Eleanor Holmes Norton (D-DC) who received the award in 2008.

About Georgetown’s Let Freedom Ring Initiative
Georgetown University’s annual Let Freedom Ring Initiative honors Dr. Martin Luther King, Jr. through a series of academic, artistic, and extracurricular programs that examine Dr. King’s life and work and address the contemporary challenges our nation faces in order to fulfill his dream of justice and equality for all people.  For a complete listing of the week’s events, visit http://mlk.georgetown.edu.”