The wars in Iraq and Afghanistan have been for many a source of great angst, argument, and anxiety. Whether you support one, or both, or neither

of the wars, the reality is that they are going on and real people are fighting in them.

For many back in the home countries, unless they know someone or of someone who is in the military, the wars can be hard to comprehend.  There is a disconnect, if you will. A gap. It has been mentioned more than once that our TV-obsessed culture has gotten some people to think about the wars like a TV show or a movie. Obviously, nothing could be further from the truth. And with each returning solider, the reality becomes clearer. The reality of what they have gone through and the reality of the challenges for many of them now that they are back. A major challenge can be getting comfortable back in civilian life.

We were alerted to a piece from the good folks at Change.org – specifically, the Veterans Issues section – that saddened us. About the suicide of a soldier back from Iraq, it was another reminder of a major problem, certainly for U.S. solders.  In early 2010, the Department of Veterans Affairs released a report “raising concerns over the suicide rates among veterans between the ages of 18–29, which went up 26 percent from 2005 to 2007, climbed in 2008 and continued to surge into record-setting, disastrous levels in 2009.” Assimilating into civilian life after serving certainly cannot be easy and it seems resources are lacking to meet the needs of a large group of our citizenry. Whether mental health issues, physical issues, or job issues (the unemployment rate last year for young Iraq and Afghanistan veterans hit 21.1 percent versus 16.6 percent jobless rate for non-veterans of the same ages, 18 to 24) – we are facing a crisis. 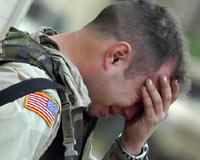 We could go on and on about how much needs to and should be done for these individuals and their families and their communities. Thankfully there are many great support groups, including those made up of fellow veterans are doing their part (e.g. Iraq and Afghanistan Veterans of America (IAVA).  And sports has played a direct and indirect role in helping veterans of all ages. Makes sense. Sports helps us connect, helps us “bridge the gap.”

We have highlighted at Sports Doing Good stories of the bonds formed through playing sports during and after active duty, soldiers getting together to watch a major sporting event 10,000 miles away which gives them a brief reconnection with home, and the power of sport to help those who come back with major injuries to work their way back physically and emotionally. And there have been stories of the many sports teams and properties such as golf that have acknowledged the service of these men and women with free tickets to games and events, and other outreach efforts. All of that should continue.

And now there is a new program to help veterans in the U.K. that may

serve as a model for greater support from the world of sports. The program involves one of the biggest teams, Chelsea FC, in the world’s most popular sport, soccer/football.

The program, Inside Right, “will use football as a tool to help veterans adjust to civilian life after returning from active service. The veterans will be predominantly aged between 20-50 years and will most likely have served in Afghanistan, Iraq, Northern Ireland, the Falklands, Bosnia or Kosovo. The programme will be delivered by five professional football clubs: Chelsea, Everton, Colchester United, Portsmouth and Lincoln City.

Inside Right’s six main objectives are:

supported through funding from The Royal British Legion, the Ministry of Defence, ABF The Soldiers’ Charity, the RAF Benevolent Fund and Comic Relief. The Mental Health Foundation and Combat Stress are also key stakeholders in the programme’s development.”

We applaud all of the organizations involved. Addressing veterans’ issues needs to be a comprehensive effort and expert support is needed from multiple sectors of society. In this program, it looks like that will happen.

We invite you to learn more about the program and its supporters by clicking here.