From Seth:
Thanks for you interest in both Haiti and Sporting Chance Foundation.  It was crazy, I was just sitting around the other day pondering how quickly the Earthquake in Haiti was in and out of the national media, yet the crisis still exists everyday for the people of Haiti.  So I appreciate your help in trying to return the spotlight on to the tragic events of January 12th and the rebuilding process that is taking place in Port-au-Prince.

UPDATES:
Ironically, I had been planning a fundraiser for Sporting Chance Foundation in Columbus, OH for January 14, 2010.  As you can imagine, after the events of January 12th the fundraiser took on a whole new meaning and garnered unparalleled media attention from the local outlets.  The fundraiser was a HUGE success, raising more money than we had previously at any single event over the last 3 years.  We had a sports memorabilia raffle and silent auction at the event.  Having spent 4 days in Port-au-Prince (PAP) just 3 weeks prior to the earthquake we had many photos of our recent trip to show those in attendance just how bad the living conditions were BEFORE the earthquake, and ask them to use their imaginations to think what people were going through now. 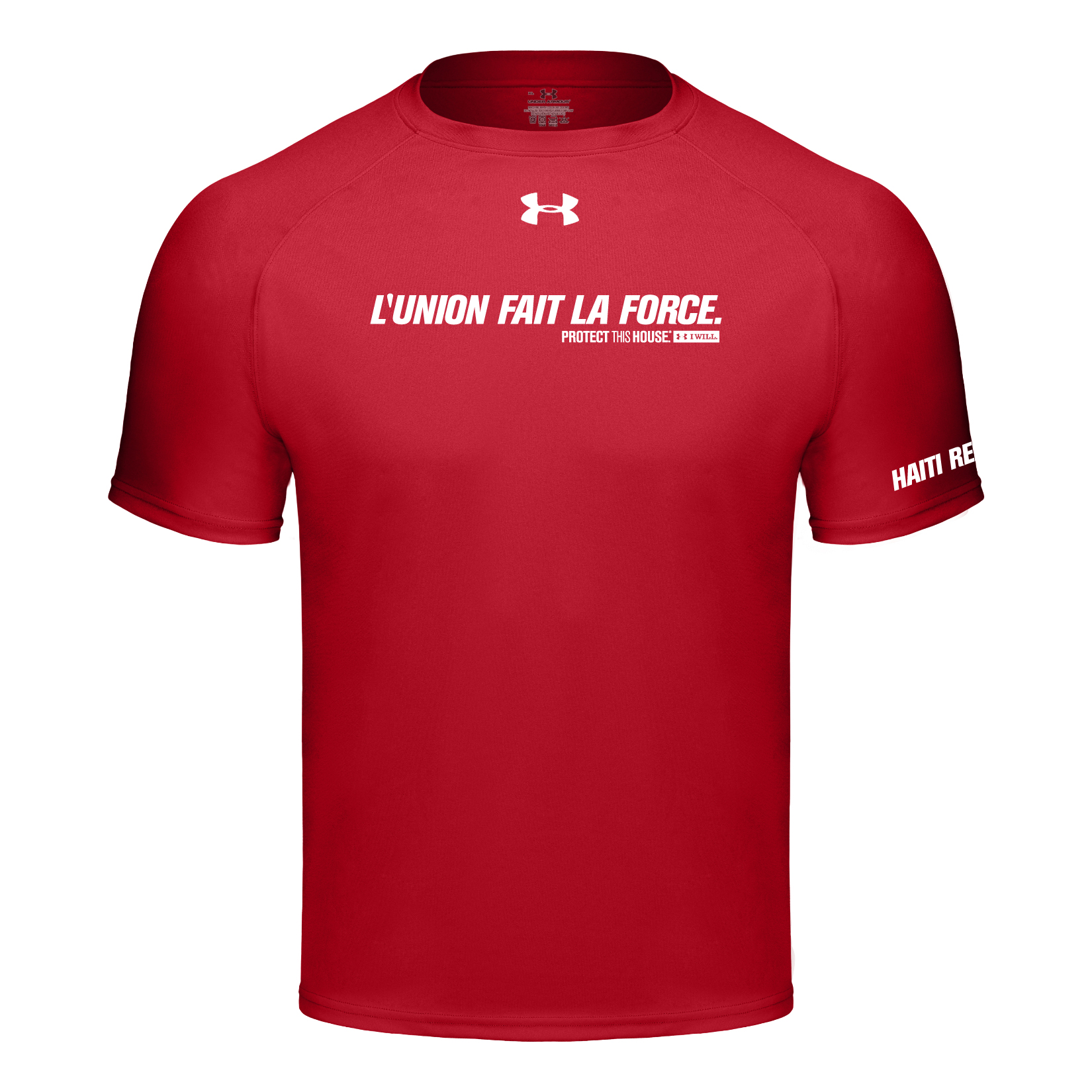 soon as I stumbled upon the motto I knew it was the one that was going to go on our shirts because it is so fitting for the time.  The Haitian people are extremely strong, and must be to sustain the daily living conditions that exist on a daily basis.  However, without pulling together and “unifying” after the earthquake, it would have been nearly impossible to survive the tragedy.

Support from the Red Bulls
The New York Red Bulls have always been big supporters of Sporting Chance Foundation, and jumped at the opportunity to put a number of fundraisers together to benefit the earthquake relief efforts of Sporting Chance Foundation.  Namely, the New York Red Bulls decided to offer tours or our brand new soccer stadium (Red Bull Arena in Harrison, NJ) to fans in return for a $100.00 donation to Sporting Chance Foundation. With the help of my teammates (who were amazing for this fundraiser by the way) we gave over 50 tours of Red Bull Arena and raised over $5,000.00 for the earthquake relief fund.  Both the players involved and the New York Red Bull fans that participated enjoyed the experience and were thankful that the money raised was going to such a great cause.

Ongoing Development Programs
With the money raised since the earthquake we have focused on two primary programs, a “Work for Cash” Program and a Educational “Summer Camp.”

The “Work for Cash” Program is designed to be a mutually beneficial (for the individuals participating and local PAP citizens) program that gets money into the hands of those in need while helping to clean up downed buildings and start the rebuilding process.  We are hiring two teams of 10 locals for a one month period to participate in the program.  At the end of the month we will hire another 20 participants to try and help as many people financially as possible.  The Educational “Summer Camp” is a 5 month program designed to get the local PAP youths off the streets and back in the classrooms.  There will be 240 children participating in the program for the 5 months.  The education program will help prepare children affected by the devastating earthquake on January 12, 2010 get back to a classroom environment and provide these children the opportunity to complete the school year. The program will also offer the children extracurricular activities in order to stimulate their creativity and offer much needed leisure activities.

I hope this gives you and your readers a fairly good idea as to what we have been up to.  Again please let me know if you need anything else from me.

Final Words
We thank Seth for taking time out during his just-started season to update us on his efforts. Amazing stuff. We look forward to highlighting Seth’s work again. We strongly encourage those of you who want to support Seth and Sporting Chance Foundation to contact them. Also, we encourage you to get the Under Armour SCF “L’UNION FAIT LA FORCE” shirts. They are great. I have two!!